She's having a Me Party!

It’s August 20th and Amy Adams celebrates her 44th birthday and a career that has spanned 55 films and TV shows. From current hit Sharp Objects all the way back to her debut back in 1999’s Drop Dead Gorgeous.

In the early years, Adams would do the TV rounds with small roles on the likes of That ‘70s Show, Charmed, Buffy The Vampire Slayer and Smallville. She also took over the role of Kathyrn from Sarah Michelle Gellar in a straight to DVD sequel/prequel Cruel Intentions 2.

Yet Adams knew she was always destined for greater things and she slowly grafted, playing the long game and American Hustled her way to become one of this generation’s finest actors.

In fact, one of her first major film roles was Leonardo DiCaprio’s fiancee in Catch Me If You Can (2002). Sixteen years later, she is the Academy’s female version of Leo with 5 nominations to her name (Junebug, Doubt, The Fighter, The Master, American Hustle). Now everyone is wondering what she has to do to finally win the big one.

With that in mind, let’s celebrate Amy Adams’ birthday with a look back at some of her career highlights.

Your Cinderellas and your Beauty And The Beasts can take a running jump off the chasm that many Disney villains fall to their death in, because Enchanted’s Giselle is THE original live action Disney princess.

Starting off as a traditional hand-drawn animation, Giselle transforms into Amy Adams once she falls into a magical portal from Disneyland into Manhattan. Thankfully her appearance is the only change to the character because the joy of the film is seeing Adams excel in the fish-out-of-water storyline of having a Disney Princess acting out to the bemusement of angry New Yorkers… who find themselves drawn into gigantic musical numbers with dancing animals.

It was Adams’ breakthrough performance and one of the best original Disney films in years.

At this point, Amy Adams was more well known for playing kind, innocent, wide-eyed roles. The Fighter gave her the chance to show some steel and a fieriness as Charlene, the girlfriend of boxer Micky Ward. She might have lost the Oscar to co-star Melissa Leo but she shows she can go toe-to-toe with the best of them. Just witness the scene where Adams and her Boston accent takes on Micky’s mum and her sisters single handed with some fantastic verbal and physical sparring. 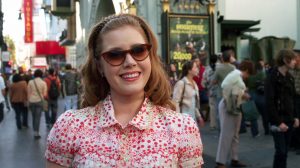 Adams once again used her impressive musical talents to the role of Mary in the big screen return of The Muppets.

In fact, only Amy could have managed to get away with singing a song about the thrills of self pleasure in a family film with Me Party.

No, seriously. Go back and listen to the lyrics again…

“I look around and once again I’m on my own
My man ain’t here. He’s gone and done me wrong
No one’s gonna stop this girl from having fun
I throw my hands up high and have a party for one
I’m having a me party, a party by myself
A me party! I don’t need nobody else”

As a woman sent a novel by her ex-husband, Adams reads about a central character rather similar in appearance to herself, played in novel narrative by Isla Fisher. The two actresses often got mistaken for each other in Hollywood and this provided a meta take on the film.

Adams’ role is fleshed out through flashbacks to the real relationship but it is a testament to the quality of her acting that she can make the multiple shots of her reacting to reading the manuscript so captivating and emotional. 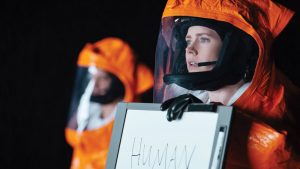 It is was an incredible oversight given that much of the success of the film is down to her amazing performance.

Her character is recovering from the death of her daughter when the world is visited by twelve spaceships. As an expert in linguistics, she is asked to help forge communications with the alien species. As the plot advances, she is forced to confront her feelings about her daughter. At times it feels as if she is strangely distant from the pain and reality of her situation but it all comes to an incredibly powerful and emotional climax where you realise just how clever and assured Adams’s performance truly is.

Have we missed your favourite Amy Adams performance? Come let us know in the comments below.