In the post-Christmas period of early January, there doesn’t seem much to celebrate in the lull: the nights draw in with the speed of a Podracer; the weather is as cold as The Day After Tomorrow and you’re still probably eating (or at least drinking) left-overs from Christmas.  Well, today, the 5th January, is a day worth celebrating – it’s none other than Bradley Cooper’s birthday.  What better opportunity to have a quick look at some of his film highlights?

With 60 film credits on IMDB, it has been a hard choice to choose from; read on to find three special gems of his. 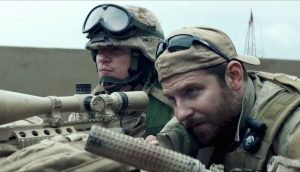 Cooper’s portrayal of Navy SEAL Chris Kyle is one of energy, power and grit, perhaps one of his finest performances. The film depicts Kyle’s struggles of war on the battlefront in Iraq and back home with his family, where he cannot forget the war.  Aside from some complaints about the Stateside scenes, where some inevitable cliches surface: Taya Renae Kyle’s (Sienna Miller) uttering of “Even when you’re here, you’re not here. I see you, I feel you, but you’re not here.” is one that stands out, American Sniper is a strong film where Cooper under-plays the character well and we genuinely feel the trouble Kyle has balancing his sense of duty with the knowledge that no end-game is in sight. Cooper’s deadpan presentation of “I’m not a redneck; I’m a Texan!… We ride horses, they ride their cousins.” is just one of several uses of humour which Cooper fires at the audience like a bullet from his Remmington 700 Long Action rifle.  To sum up American Sniper, there can be no better praise than that of Chris Kyle’s widow, Taya, who said the film “brought her husband back to life.” 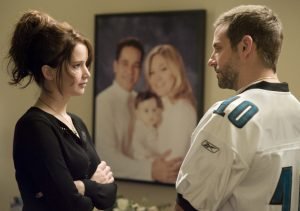 In a complete contrast to American Sniper, this film sees Cooper play a former teacher after a stint in a mental institute.  After moving back home with his parents, Pat Solitano (Cooper) attempts to reconcile with his ex-wife.  Only, things are bound to go wrong: he meets Tiffany (Jennifer Lawrence) a perplexing, mysterious girl with issues of her own.  The film centres on the love-hate friendship between the two characters and it is played exquisitely well, with some laugh-out-loud moments such as the scene where Solitano clearly dislikes something read in A Farewell to Arms which is thrown with pure venom out of his window.  The film works best when Pat and Tiffany are sharing the screen together- the bond created between them and the development of the relationship between the two characters demands you watch until the end.

The last gem on this list has to be GotG, featuring Cooper as Rocket, a talking raccoon.  OK, a huge admission now: at first, Guardians was on my “I do not want to watch list” but after the first viewing, it became apparent how amazing the film is and beyond any doubt, that is partly because of Cooper’s role as Rocket.  From the quality soundtrack ‘Awesome Mix Vol. 1’, to the tongue-in-cheek humour (who would call themselves Star Lord?!), the film oozes enough awesomeness to fill ‘Mix Vols 1, 2, 3’ and beyond.  Cooper nails the emotional element to making Rocket the much-loved character we know today.  “No, Groot! You can’t! You’ll die! Why are you doing this? Why?” being said while a tear is wiped away left me…wiping away a tear, in part due to Rocket’s absolute emotion witness in his voice.

Bradley Cooper has proven throughout all of his films, and not just the above three, that he can perform in a multitude of roles: from comedy to action, romance to motion-capture, even the power and intensity of his voice captures the audience.  The fact that Cooper was one of the highest paid actors for three years and being nominated for four Academy Awards, two BAFTAs and two Golden Globe Awards, speaks volumes as to his skill and popularity as an actor.

“This is what I believe to be true.  You have to do everything you can.  You have to work your hardest.  And if you do, if you stay positive, then you have a shot at a silver lining.” – Bradley Cooper