The obvious challenge of profiling someone like Carrie Fisher is in deciding how best to address, as the cliché puts it, the elephant in the room. One is, of course, aware that Fisher’s career did exist outside the role of Princess Leia, and that to suggest otherwise by careless omission would be to do her a great disservice. On the other hand, such a pivotal role in a cultural juggernaut like Star Wars is guaranteed to deflect attention from other achievements, and it is not unfair to say that Fisher’s career didn’t have a vast array of highlights outside of the franchise (in the way that, say, Harrison Ford’s did).

Fisher’s film career began in 1975 with Shampoo, a satirical romantic comedy which saw her share the screen with Goldie Hawn, Warren Beatty and Lee Grant, among others. Two years later, at the age of 20, she assumed the role that would come to define her career.

Star Wars became the highest-grossing film of all time upon its release, and still occupies the second position on the list of highest-grossing films when box-office takings are adjusted for inflation. Seen as a partial driver of the industry-wide shift from character-driven dramas to high-concept blockbusters, and cited as an influence on a plethora of our most respected filmmakers, it is difficult to overstate the significance of Star Wars in the world of mainstream cinema. 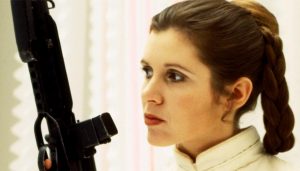 Fisher’s portrayal of Princess Leia was spirited and engaging. The character was unyielding in the face of adversity, and her nonchalant deflection of Han Solo’s flirtations in the earlier part of the original trilogy was a joy to watch. That the role cemented her place in the annals of cinema is not in question. Unfortunately, however, hugely visible blockbuster franchises do not always pave the way to illustrious careers for previously unknown actors. Like Mark Hamill (and, two decades later, Hayden Christensen), Fisher experienced a sharp downturn in her acting career after leaving the world of Star Wars.

Whether this was due merely to typecasting, however, is questionable. Fisher spoke openly about her personal issues, including struggles with bipolar disorder and substance abuse. Despite undergoing treatment for such conditions for much of her life, it is not clear that she ever completely got the better of her demons; cocaine, ecstasy and opiates were all found in her blood after her death in 2016.

While she was not destined to enjoy superstardom in the realm of acting, Fisher was not yet finished with the entertainment business. She came to be recognized as a talented writer, penning the semi-autobiographical novel Postcards from the Edge and the nonfiction book Wishful Drinking, along with other novels. The screenplay adaptation she wrote for the former earned her a BAFTA nomination.

She began working as a script doctor in the 1990s, contributing to films such as Sister Act (1992) and The Wedding Singer (1998), as well as later entries in the Star Wars franchise. Television appearances in more recent years also brought her back into the spotlight. She made a guest appearance on 30 Rock in 2007, and her last appearance as Mia Norris in Catastrophe, a role she occupied from 2015-2017, earned her a posthumous Primetime Emmy Award.

It is cruelly poignant that Fisher’s last role was the one that launched her career, as the fiery princess from whose shadow she never quite emerged. She completed filming of her role in (the regrettably awful) The Last Jedi (2017) shortly before her death in December 2016, and will appear in the ninth saga instalment in 2019 through the use of unreleased footage from The Last Jedi and The Force Awakens (2015)

What are your fondest memories of Carrie Fisher? Let us know in the comments below!