Arguably, children of the modern day have missed out massively.  There, I said it.  They’ve missed out on growing up with Arnie films being released, watching them as brand-new films.  They’ve missed out on the true Last Action Hero.  With over 64 film credits dating from 1970 to the future rumoured appearances, Arnold Schwarzenegger is one of the most famous and popular action film stars ever.  With films generating plenty of toys, spin-off films, computer games, books and so much more; Arnie’s Birthday certainly needed a celebration and over here at Flickfeast, we couldn’t think of any better way then a good old-fashioned Top Ten Countdown.

As any film-fan will tell you – a “Top 10” list will always have about a hundred entrants…so, here goes…

Number 10- Jingle All the Way 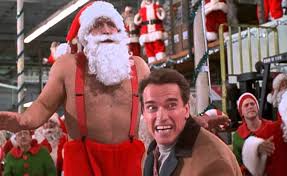 Christmas films of any kind are inadvertently cheesy, cliche, obvious…But Jingle All the Way has got to be one of Arnie’s top films.  The brilliance of such an action-star playing a useless dad who puts work ahead of his family is great.  The film is a must-watch every year, just to watch for the on-going bomb-scare prank/scene.  Seeing Arnie dash madly over town for the last Turbo-Man doll sees him end up in all sorts of trouble with one very irate police officer who then appears at the end with such a look!  A message for all – make sure you buy your presents in plenty of time! 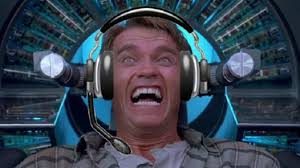 Perhaps Total Recall deserves to be higher rated but I think as a younger person watching this classic, I missed out on so much of the deeper meanings that, as an adult, are only more apparent: the slavery on Mars, the lower-classes being used and the what-is-real twists never showed when I was so much younger.  Instead, I loved the three-boobed lady, the action and effects – this scene-stealer discusses one such moment.  Setting Arnold Schwarzenegger off against Michael Ironside was a beautiful bit of casting – never has an evil bad-guy ever looked so angry at the world.  Total Recall stands proud and tall – a great action film with plenty to think about.  Deserves multiple watches. 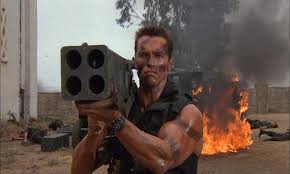 I must start with a huge complaint based upon the current UK DVD version – many of the brilliant scenes have been cut – I for one sorely miss the guy getting scalped by a circular-saw blade.  You could say because of these annoying cuts, Commando has been shafted.  I loved this film so much – the over-the-top battle preparation by Matrix ( Arnold Schwarzenegger), his hilarious one-liners – “I lied.” (watch it, you’ll understand) and all-out killing machine performance at the end ensures Commando will be a contender within a Top 10 any day of the week.  The film perfectly highlights the love of a father for his daughter – everything that he goes through to get her back is insane, including the use of an inflatable to Tarzan his way through a shopping mall.  This film has it all- capped off by the brilliant performance from Vernon Wells as bad-guy Bennett. 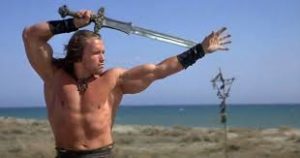 One quote will summarise why this is an awesome film: when asked what is best in life, Conan fires back, “To crush your enemies. See them driven before you. And to hear the lamentations of their women.”  Obviously there is so much more to this film than just one quote.  A slave, trained for strength and killing gets freed and searches for revenge.  Along the way, he finds help in an oddly mannered chap Subotai (Gerry Lopez) and sultry vixen Valeria (Sandahl Bergman).  Conan features plenty of fighting, blood, gore, sex and giant snakes – the final two aren’t quite linked.  With the inclusion of James Earl Jones as Thulsa Doom (a strange guy great at hypnotising and turning into a snake) there is plenty to love about this film.  Just ignore the 1984 sequel, possibly one of Arnold Schwarzenegger’s worst films ever.  There’s also been a watchable remake of Conan too. 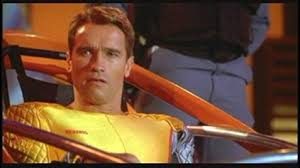 Based on a book by Stephen King (under a pseudonym), The Running Man is a film set in the damaged future (2017 -ahem) where criminals are sent to be competitors on a game show where they must face off against sadistic Gladiators-style champions; the best of which has got to be Buzz-saw.  Arnold Schwarzenegger’s character (Ben Richards) is a wrongly-convicted ex-cop who is sent to the show.  Only, things don’t go as planned for the show and Richards becomes more popular with the crowd as he enters a kill-streak of the champions.  The Running Man features Arnie on a high – his one-liners are said tongue-in-cheek, just enough action and plot mixed to make things interesting and with this film you know what to expect – Arnie kicking ass. 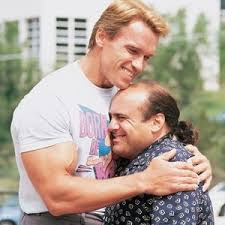 Another Arnold Schwarzenegger comedy makes this top 10 list – so not just an action hero, after all.  I have such fond memories of Twins and even now I can often hum some of the soundtrack.  Such a feel-good, happy film: perfect for any Sunday afternoon.  Arnold plays one twin who was super-created to be highly intelligent, strong…just the perfect specimen of humanity.  Something goes slightly awry – a secret twin (played wonderfully by Danny DeVito) is born and then hidden away.  Years go by and the film picks up with Julius (Arnie) finding out about – and tracking down – his twin.  Without spoiling too much, DeVito’s twin is the exact opposite and his life spirals further down as he becomes embroiled in a scheme gone wrong.  A favourite of mine to watch at pretty much any time and with rumours of a sequel- colour me interested! 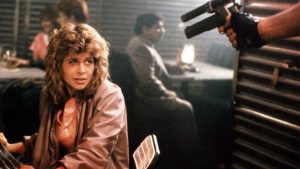 Perhaps the film which made everyone aware of Arnold Schwarzenegger, certainly as a menacing figure at the very least;  The Terminator needs no plot summary, so here’s why it is on the list – nigh-on perfection in a film.  Totally cutting edge at the time, its final scenes are a little dated but take them with a pinch of salt because this is one amazing sci-fi action film.  We get to see a lost-in-the-world, timid female become strong and independent, the possible danger of when allowing computers to do the thinking and love stretched over time.  Oh, and that whole time-love-sending dad back in time thing can “make a girl go crazy” (see what I did there?).  The film to launch a franchise – The Terminator. 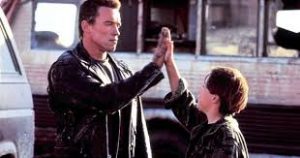 With The Terminator being such a huge success – a sequel was bound to come along.  This was one of the first films I saw on our new Video player back in the early 90s and I always have fond memories of it, including the toys which came along too!  Arnie’s back (surprisingly) but this time as the good guy.  Sent back in time to protect John Connor, the T100 has a new adversary in that of the T1000 played by Robert Patrick.  With cutting edge and revolutionary graphics, T2 solidified itself in the Sci-fi minds of many.  The action is smooth, the pace is great and the plot is easy to follow.  It built on the original in every way with an awesome soundtrack to boot. 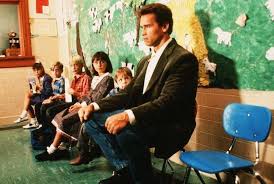 So, another Arnold Schwarzenegger comedy makes its way to runner up.  Tough cop Kimble (Arnie) goes undercover trying to locate a dangerous criminal’s ex-wife who may just have the knowledge to put him away.  There’s a saying- don’t work with animals or children – which makes a lot of sense but in this film, the children totally steal the film but it must have been a nightmare!  Kimble is as you would imagine – a terrible teacher who has no clue what-so-ever, but along the way he wins the hearts of those kids and in time becomes well-loved by the children.  And their mums.  The film is littered with comedy, from the boy insisting everyone has a tumor, to the girl who “has to go to the bathroom” a lot.  There’s a lot of love towards this film and it was great to see Arnie in this role.  Just whatever you do, please avoid the shocking sequel. 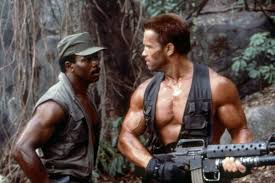 “Get to the chopper,” must be one of my most mis-used quotes.  I’ll use it for anything.  Literally anything.  Hands down, Predator is one of my all-time favourite films, full stop.  From the powerful opening build up with thudding soundtrack, to the shocking reveal at the end, Predator is non-stop. Arnold Schwarzenegger is supported by a fantastic cast the likes of Jesse Ventura, Carl Weathers and Bill Duke among the line-up; all of who play their roles brilliantly.  “I ain’t got time to bleed,” is another quote which has many purposes.  A small team of commandos is sent on a rescue mission but things turn south quickly, as it turns out they are being hunted by someone..something.  The team gets picked off one-by-one by something they can’t see, but, “If it bleeds…we can kill it,”.  So that’s what they attempt to do.  Without a doubt, Predator is an awesome film which deserves Number 1 completely; wholly enjoyable, packed full of action and littered with many notable quotables.

Do you disagree?  Perhaps Arnold Schwarzenegger has been given the Raw Deal with this list; maybe I need to think of an Escape Plan before the Last Action Hero is back….leave your comments and advice in the comments below!