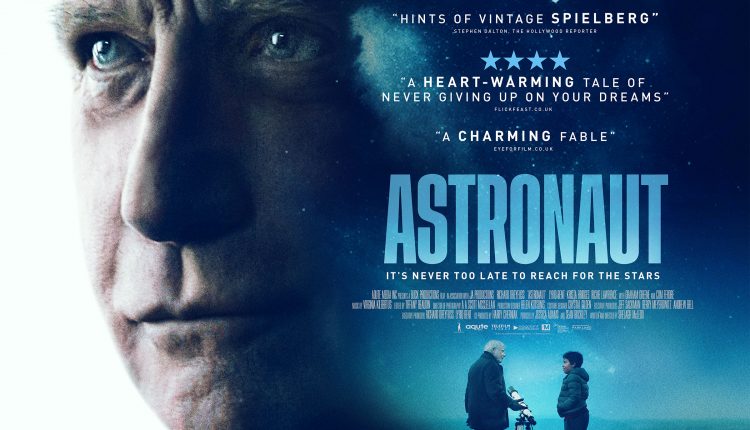 Astronaut follows Angus Stewart (Richard Dreyfuss), an octogenarian, who battles his family, ill health and time to win a competition for a golden ticket on the first civilian space journey.

Astronaut had its World premiere at 2019’s Edinburgh International Film Festival and Dallas King had the opportunity to sit down with lead actor Richard Dreyfuss and writer-director Shelagh McLeod to discuss the film.

Flickfeast – Where did the idea for Astronaut come from?

Shelagh – Well the story wouldn’t leave me alone. My mum died in a nursing home and there was an old guy in the garden who was in a wheelchair and he was always staring up at the sky. One day I sat next to him and said “What is it you’re looking for?” and he said “Another go”. That was the trigger for this story but it is hard because then you have to drill down and find, you know who this man is but what’s the story about? The story that kept coming back to me… I mean I write a lot from my heart and my personal experiences… was the old people I met at my mum’s nursing home were lonely and they were surrounded by people but they were lonely. I wanted Angus to have some friends. I wanted him to make friends and that became the core of the story.

Flickfeast – 50 years ago JFK said “we are going to go to the moon, not because it is easy but because it is hard”. Making a film must be a similarly daunting prospect. What were some of the challenges you had to overcome on the film?

Shelagh – Pitching this story for six and a half years, trotting round the world and I’m a middle-aged TV actress trying to make my first feature film about an old man who goes to space. They would literally go “No, no, no , goodbye” so it was an uphill battle. I could see how the elderly were being marginalised, especially in cinema but I mean look at Marigold Hotel. There is a massive audience for this type of thing…

Flickfeast – I used to work in a cinema and we would call it the grey pound, because there was an audience that had been forgotten but people are finally waking up to them…

Shelagh – Exactly. I mean I don’t know if it is necessarily a family film but a drama about this story unites families. You go home and talk about it. I think that’s important too. Every filmmaker says it’s hard to make a movie. Richard’s made a million brilliant movies but honestly it was tough this one. We got a lot of doors slammed in our faces. You also get that thing of the budget. You know, you go to Cannes, dreadful place, never going again, but you go and you say I need some money please and you tell them the story and they tell you “well this is a $10-$20 million and we would like Steven Spielberg to direct and Richard Dreyfuss to star in it and who are you?”. So we would then have to pitch as hard as we could and then finally Telefilm came in and they loved the story and believed in it and then Richard, thank God, said yes.

Richard – You know everyone in the world wants to know how people make movies. There has never been an art form that has so overwhelmed an entire culture. I worked with Truffaut and on the day I met him, I walked over to him and shook his hand and said “Auteur is nonsense” because it’s my belief that directors are asked more questions in any occupation than President of the United States and they have to create a thing from the input of many, many, many expert people and they see the final shape but it is based on their work. You can’t do it alone.

Flickfeast – Richard, how did you approach the character’s central dilemma? To pursue his dream in spite of the odds, hurdles and initial misgivings of his family. In your character of Angus I saw parallels with Roy Neary’s story in Close Encounters Of The Third Kind. In that film his dream and obsession ultimately cost him his family but here Angus’s pursuit could potentially allow him to reconnect with the family.

Richard – There’s a line in the Zoo Story by Edward Albee, “Sometimes it’s necessary to go a long distance out of your way in order to come back a short distance correctly”. Sometimes it’s the only appropriate thing to do is to announce and commit to getting that thing accomplished and done. No matter how silly it sounds. To take your exit and make it work. Make your moment as selfish as possible. You know why you’re doing this and ultimately it doesn’t matter if the family doesn’t understand. There are lots of stories about Albert Einstein misunderstanding what his father was trying to say when he threw his entire family out of the room when he was dying. He said “Get out, get out” because it was more important for him to confront his fears of this passage than it was to be a member of a loving family and that it almost killed Albert and he rewrote his entire relationship with his father. The only way Albert could interpret what his father was doing was by saying “I come first, I need this”. In Angus’s world, it takes him so long to fill out the form because he is a gentle man who does not like confrontation but if not this time, then when… Seize the day. The feeling he must have had. You see it when he is sitting in the ship, you see this delight that he’s made it. It doesn’t matter if he lives or he’s dead in one second or ten, it doesn’t matter. What matters is he’s had this secret dream for so long and he’s fulfilled it.

Astronaut is available on Video on Demand from April 27th.