Disaster movies are defined as films “in which a disastrous event such as an earthquake, fire, air crash etc is the focus of the action.” Whilst that’s technically true of course, the Feastfam like to do things a little differently so we threw monetary disasters, directorial disasters and personal disasters into the definition too so we could present to you, the best all-time disaster movies. First up…

First off, let it be known that despite any preconceived notions of it being a disaster, Jaws: The Revenge was actually a sizeable hit. The worldwide gross, according to Box Office Mojo, comes in at a pretty impressive $51,881,013 off the back of a $23 million budget.

Naysayers might argue that the Jaws name alone was enough to guarantee financial success, but consider the abject creative endeavour of Jaws 3D and that argument falls a little flat.

So, why was Jaws: The Revenge such a disastrous film? Well, the reasons are myriad; the result of curious decision-making rather than the skill of the filmmakers involved. For starters, Joseph Sargent was hardly a second-rate director, having helmed the classic crime caper, The Taking of Pelham 123, while Lorraine Gary returned as matriarch of the Brody clan. Michael Caine, fresh from his Oscar nod in Hannah and her Sisters, also joined the cast. Roy Scheider, meanwhile, turned down a cameo, but the signs were good.

Then things became tricky. Universal Studios president, Sid Sheinberg, offered Sargent complete creative control on the film, even cutting through all the usual red tape to green-light the film. However, any thoughts of producing a rival to the original were cut short when Sheinberg announced the date for the movie’s premiere, just nine months later. 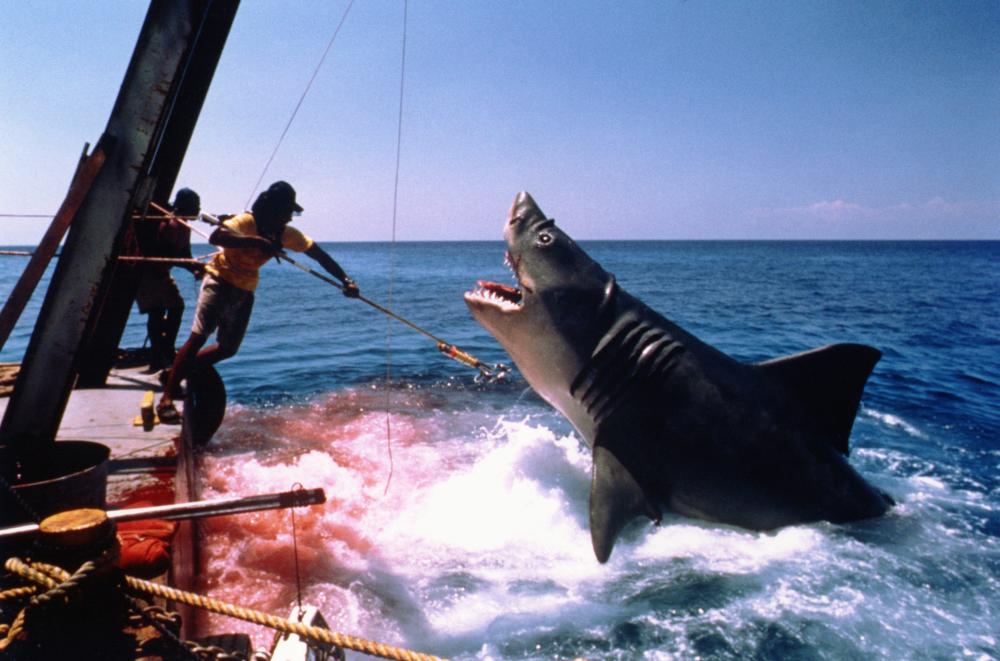 Usually, the gestation period for a production is at least a year, but the abridged period was prohibitive and, ultimately, catastrophic. Despite the dreadful result, Jaws The Revenge does offer one or two chinks of light; Sean Brody’s death scene ranks highly in the Jaws canon, and the themes of loss and grief are interesting if under-developed. Contriving to send a vengeful shark over a thousand miles, though, was pure folly, leaving Sargent to later reflect: “How do we get involved in something that idiotic?”

Ishtar’s reputation doesn’t only precede it, it totally supersedes the film itself. Considered a disaster on the level of Michael Cimino’s Heaven’s Gate, it’s often held up as another example of how troubled productions and inflating budgets closed the curtains on the New Hollywood era.

It hasn’t even had the good fortune to undergo a critical revaluation, as Cimino’s film has. Which is a shame, since a) it’s not actually that bad — its blend of political intrigue and goofy comedy can be clumsy, but Dustin Hoffman and Warren Beatty as a completely clueless and tone-death musical duo stranded in a Middle Eastern warzone are a hoot — and b) the most disastrous thing about Ishtar is that it more-or-less ended writer/director Elaine May’s career. 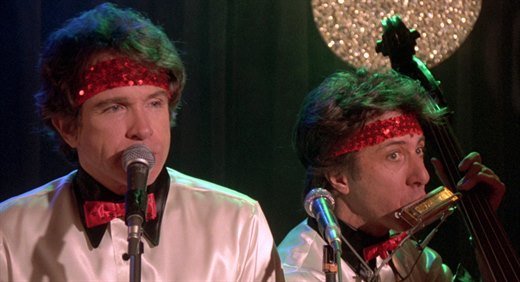 Okay, so there were plenty of other elements of disaster (the fact it was filmed in the middle of ongoing conflict, its spiralling budget, the bickering cast and crew, the reviews) but the loss of May’s singular comedic voice is the most tragic. She first came to prominence in the fifties as one half of the double-act Nichols and May, whose groundbreaking improvised comedy routines became a Broadway smash. The other half of that duo, one Mike Nichols, went on to direct bonafide classics like The Graduate and Who’s Afraid of Virginia Woolf?

May appeared to be on a similar (but separate) career trajectory. Her first picture was the dark comedy A New Leaf, which was followed by the broader The Heartbreak Kid, and then the Cassavettes-like dramedy Mickey and Nicky. Ishtar should’ve pushed her over to the sort of success her former collaborator enjoyed for decades to come. Instead, she never worked in Hollywood again, save for a recent appearance in Woody Allen’s woeful Amazon series. The film isn’t a disaster, but the loss of May really is.

When you think of disaster movies, it’s reasonable to assume that most people immediately imagine death on a large scale, catastrophic events and widespread destruction. As for the other people? It’s all about nuns slapping hysterical passengers, attendants fellating inflateable pilots and air traffic controllers picking the wrong week to stop sniffing glue. My go-to disaster movie is Airplane! but you figured that much out for yourself, Shirley? 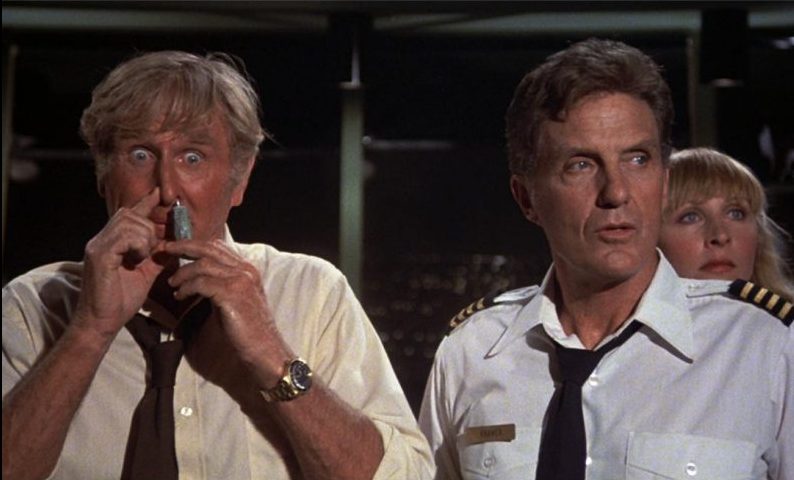 The 1980 spoof disaster movie was the opposite of disastrous for it’s cast and crew, propelling the legendary Leslie Nielsen into the stratosphere as the ultimate straight man. It also gave the writing/directing triumvirate of Zucker, Abrahams and Zucker a licence to print money, which they continued to do with The Naked Gun: From The Files Of Police Squad!, Top Secret! and Hot Shots! It’s not all ROFL-copters though – Airplane! also paved the way for the Scary Movie franchise and I Know What You Did When You Screamed Last Halloween etc, etc. And that’s a whole different kind of disastrous.

So what’s the plot? It’s the main events of a play, novel, film or similar work, devised and presented by the writer as an interrelated sequence…but that’s not important right now. Enough has been said about how funny Airplane! is, particularly by me, but it’s suffice to say that this is as life-affirming as any ‘true’ disaster movie should be: Sentimental and nostalgic, memorable and quotable, and escapism at its most…escapabalistic?

Barren is the praise for Deep Impact. The muscle heads have won. Even today, a dusty box for Armageddon is much likelier found between the far more adventurous Independence Day and Twister, than perhaps The Day After Tomorrow, Dante’s Peak or whatever else.

But where’s the love for the bookworm’s effort? The film made about and for the people down here on earth? Y’know, the people watching the dang movie. Where are they in the apocalypse? Here.

To be clear, I’m not suggesting Deep Impact isn’t dramatically contrived at times, just that it’s a model glimpse into what’s normally a backdrop to the apocalypse genre. Which is a rather shameful show of our priorities.

Modesty is key. The asteroid is discovered by a doe-eyed teen concerned most with protecting his sweetheart. Reports on government intelligence and strategy are released through an everyday MSNBC reporter who is more concerned with the equidistant disconnect between her mother, father and herself. These humble human conflicts bleed into the whole periphery. Every character’s drama is almost anti-excitement.

Therefore, on the ground level, the foreboding, Pompeian deluge feels like it’s preparing to have… well… a deeper impact (dibs on that for the sequel!).

So the real question is: where do we go emotionally? If there’s a clock on humanity, in the wake of a hurtling, unstoppable bomb, are we not trapped in a corner? Well, we are neither freed nor imprisoned, but simply changed. Unbound from our lives but still bound to our planet. So, what do we do?

Of course we’ll blow up the asteroid! And we follow that ritual sacrifice to the end, but we also follow a development: not an impossible thriller, rather a unified end of everyone’s own self and story. Deep Impact has truly noble intentions.

The “Disaster Movie” genre encompasses all sorts of films, from the based-on-a-true-story gritty and brilliant Only the Brave to the ridiculous and pointless disaster that was Dumb and Dumber Too (was there really any need?). Picking a favourite disaster movie has taken some thought – over the years there have been countless films worthy of a top ten.

However, my choice is an old-school one. The problem with modern day disaster movies is that they rely far too heavily on graphics: after a few months they look so outdated that it becomes laughable and quite unbelievable, really.

So that narrows my choice down. I could go for Dante’s Peak, starring the well-cast Pierce “Bond” Brosnan and Linda “Sarah Connor” Hamilton, or I could go for Twister featuring the late-great Bill “Hudson” Paxton and Helen Hunt. Both have effects which hold up today (practical and visual both look good upon countless rewatches) and ensure you get hooked into both films.

For me, Twister just edges it.  I was fortunate enough to go on the Universal (Florida) ride in its final year and that was an experience I will never regret – those who love the film and never managed to, you’ve missed out! 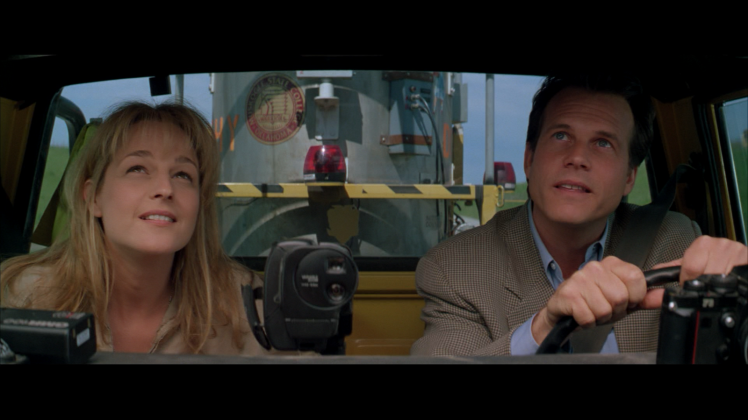 It has all the essential disaster movie qualities: good cast? Check. Deep plot? Check and double check. Flying cow? Err…Most certainly, check! Twister will be one of those all-time classic films with great lines enhancing the group spirit shown by all of the cast.  The acting is top-notch too. You immediately feel like the characters have been working together for years – just listening for their banter is enough to warrant another watch.

If you’ve never seen it before, you’ve not lived!  If you have…why not watch it again?  I mean, what other disaster movie gives life lessons like not folding the maps?

Sandwiched between The Informant! and his female-led action thriller Haywire, the film has since become just another chapter in the ever erratic career of its ‘on-again, off-again director’. This is despite hot topic subject matter (fears of global viral infections were ‘in’ at the time), globetrotting production on a Bondian scale (filming in Hong Kong, Geneva, London, Chicago) and an international cast that included Matt Damon, Marion Cotillard, Kate Winslet, Jude Law and at least 25 seconds of Gwyneth Paltrow’s face.

A pity, as Contagion is amongst his finest works. Scott M Burns’ beautifully structured screenplay keeps pace with the director’s no nonsense visual style, crafting an utterly compelling vision of our planet on the very brink of devastation due to a viral infection sweeping across continent after continent, relentlessly wiping out our population.

Shot with a day-by-day structure, the results are positively chilling, crafting not only a horribly plausible portrait of our planet on the brink of its end of days, but a fascinating look at societal breakdown at every level: online, media, governmental, working class, the ramifications, risks and sacrifices. 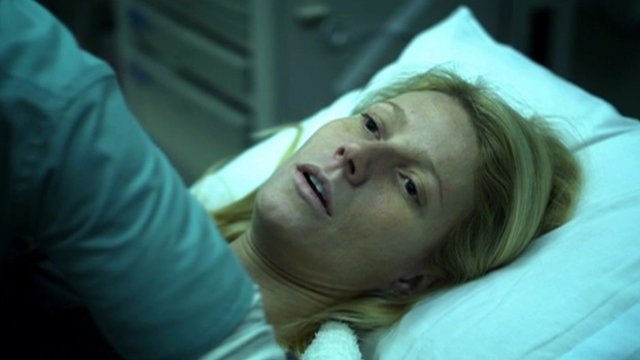 One government official is kidnapped, a blog writer becomes a prophet whilst peddling an alternative remedy, while scientists risk their own well being in a race to stop the virus spreading any further and find a vaccination that will stick.

It’s dark, thought provoking stuff, and yet Soderbergh manages to craft moments of human kindness amongst all the bleakness. A dying woman giving away her blanket; a doctor caught between professional duty and personal conflict; a father throwing a makeshift prom for his house-arrested daughter.

Stunningly paced, and mercifully short for an ensemble picture, in the end perhaps the message was too cautionary for audiences, and yet, if you’ve ever wanted to experience just how influential a film can be on your own life, give it a shot. I guarantee you’ll avoid touching door handles, glasses, your children, families and your own face for months afterwards.

And you certainly won’t go near Gwyneth Paltrow again.

So, how do you feel about this list of disaster movies? Have we missed out your favourite? Let us know in the comments below.