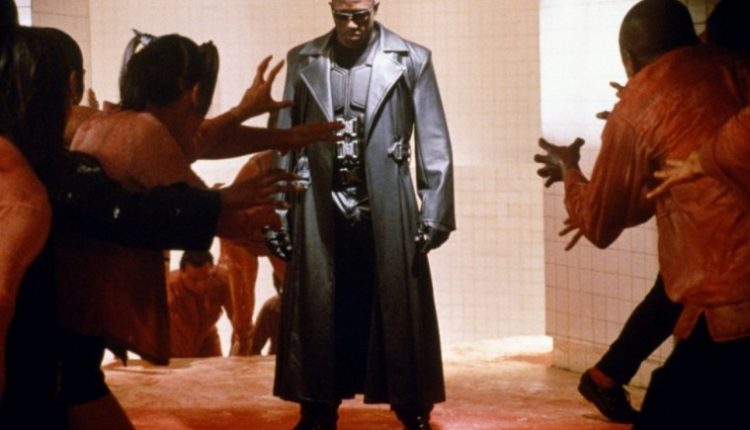 In the 1990s, before Marvel and DC became the biggest hitters in Hollywood, comic book adaptations were still largely jealously guarded by the weirder or more alternative movie audiences. As studios attempted to replicate the success of Tim Burton’s gothic Batman, the decade saw a slew of dark superhero stories including The Crow, Spawn, and The Shadow. But amongst all of these blockbusters, perhaps none has stood the test of time as well as 1998’s Blade.

Wesley Snipes stars as the vampire hunter whose mother was bitten as he was in the womb. Blade has the vampires’ powers but a dedication to protecting – and avenging – their human prey. Blade kicked off a franchise that later boosted the profile of Guillermo del Toro and gave Snipes his most iconic action role. As it approaches its 20th anniversary, its influence can still be keenly felt.

Released within 18 months of both the premiere of Buffy the Vampire Slayer and The Matrix, in retrospect Blade seems to perfectly capture the sci-fi/horror zeitgeist of its time. And yet, because it precedes the family mainstreaming of superheroes, it also feels like a true subcultural product. This is a stylish and stylised film, clearly in thrall to the body-mod and BDSM scenes that inform its leather-and-chains aesthetic. The opening set-piece, in which Blade interrupts a club of vampire ravers literally showering in blood, is a gleeful collision of horror iconography and comic book hyperbole. Even the unlikely casting of Kris Kristofferson, known for his work with Sam Peckinpah, lends a rough-hewn authenticity to the proceedings.

A gangsta rap playlist perfectly suits the sinister energy of Blade, as well as serving as a fierce reminder that genre cinema has never been the exclusive preserve of white fans.

Indeed, to a modern audience the violence might seem unusual for a superhero film. Though Marvel has its share of gore – see the emotional butchery of Logan or Deadpool’s self-conscious profanity – but Blade offers something different. This is slick choreography that draws equally on action and horror, recalling the outrageous slapstick gore of Mortal Kombat or 1980s video nasties. Its techno stylings live on in the supersonic set-pieces of films such as John Wick or Dredd rather than the bloodless punch-ups of the MCU.

Though both Spawn and Steel had previously attempted to introduce black superhero franchises, they were critical flops. But with a performance that is both committed and suitably restrained, Wesley Snipes managed to lead a major franchise without making concessions to a family audience (not to mention showing off his own martial arts skills). Moreover, Blade’s soundtrack largely comprises hip hop megastars of the day including Gang Starr, KRS-One, and Mobb Deep. A gangsta rap playlist perfectly suits the sinister energy of Blade, as well as serving as a fierce reminder that genre cinema has never been the exclusive preserve of white fans.

Blade is not the only film to strike together the various sharp edges of hip hop, sci-fi, horror, and martial arts – but it is one of the most entertaining. Its success is in how it embraces both subcultural weirdness and urban cool, and pays homage to over-the-top ideas without parodying them. This odd mix is exemplified by the perfect and bizarre one-liner with which Blade caps off the climax: “Some motherfuckers are always trying to ice-skate uphill.”

How do you think Blade compares to the current slew of superheroes? Let us know in the comments below.