Some years ago, a sadistic freak whose name has mercifully escaped my memory bared his degenerate soul in a prison interview about a killing spree. “I wish,” he mused, “the whole world had one big throat and I could put my hands around it and… squeeze.” Understood. He doesn’t want to be friends. Obviously, he had a way with words and a sense of humor. These are two qualities that are somewhat indicative of intelligence, however twisted it may be. So I respected his self-analysis. Now I suspect his insight was imperfect. He was out of touch with his true inner Lucifer. His vengeance was misplaced. Lacking real self-knowledge, being crazy, he took a scintilla of comfort from a whimsical reverie of universal genocide. In truth, he wouldn’t have felt any better after humanity’s last collective gasp. Momentarily satisfying, a global death rattle would have left him profoundly unfulfilled. Empty. Confused. All psyched up and no one left to kill.

The true object of his wrath was God.

This revelation came to me watching Blade Runner. You remember the scene. Roy Batty, the android played so masterfully by Rutger Hauer, finally finds himself face-to-face with Dr. Eldon Tyrell, CEO of the Tyrell Corporation and designer of the new Nexus-6 “replicant”, the machine with a soul. Batty is one of this breed of android. These artificial humans have a life-span of only four years and Batty is running on empty. The fugitive replicant, wanting to remain in the Garden of Eden a bit longer, prays for a taste of the forbidden fruit – a longer life. Gifted in so many ways, superior strength, intelligence, and cunning – he humbly asks not for immortality but for the lifetime of a normal man. It is a modest prayer, but one which the Lord of the Tyrell Corporation could not grant. Batty has met his maker. Taking the creator’s head in his hands… he squeezes. And darkness is once again upon the face of the deep. God is dead. 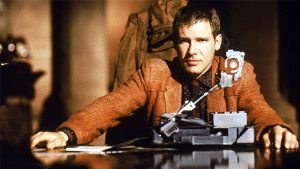 But the bounty hunter – the Blade Runner – is still in pursuit. Rick Deckard, played by Harrison Ford, must eliminate the last of the escaped androids. They were created for off-world tasks and, one by one, they have been executed by Deckard. Earth for them is out of bounds. Now is the final showdown. On the rooftops of the future Los Angeles… Oh, and what a future city it is! After all these years and advances in computer generated effects, it remains an unsurpassed masterpiece by Ridley Scott. So real, so detailed, so squalid and grubby. 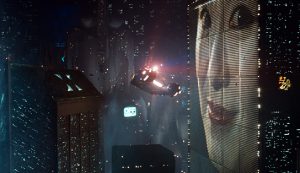 Now Deckard is a master of his craft – a hard boiled gum shoe with an itchy trigger finger. There’s a heart in there somewhere, but it’s made of stone, except for the right femme fatale. And the hot stuff Sean Young is very femme. A stunning piece of android ass. But Batty is nothing but a moving target. Until… one killer move and one kill wise crack leads to another and here’s Deckard hanging by his finger tips from the edge of the top floor. Will Batty show the same no-mercy he had for Tyrell and wait for Deckard to slip into oblivion, falling forever like in a dream?
Suddenly an android hand reaches down, tightly grips a quivering wrist and pulls an incredulous Deckard onto the roof, tossing him aside like a rag doll. Will he yet take his revenge in some other fashion?

Remember what happens next? The rain streaming down his face, the warrior poet speaks. At this moment, the android Roy Batty, his advanced Nexus 6 bioengineered consciousness received a revelation – the loss of one life is the loss of an entire world. In a godless world of his own making, he has learned compassion. He has learned to love his enemy. He has learned reverence for life.

What came next was an unscripted moment. Certainly one of Rutger Hauer’s finest moments as an actor. Urged by Director Ridley Scott to find the poetry in his character, the “spirit and heart and soul and life”, Hauer waxed eloquent. I imagine few actors have taken a director’s suggestion more to heart. Hauer said, “The things I’ve seen… All these moments will be lost in time. Like tears in the rain. Time to die.” Do I remember a white dove? Deckard is the last man standing. If he is a man. In this place it’s hard to know who is and who isn’t.

Harrison Ford is a great actor but it was Hauer who came to this movie with a deeper emotional intelligence than Ford. I’m not suggesting that Hauer is smarter or more gifted than Harrison; he just loved the movie more. He cared more. He was certainly more imbued with Ridley Scott’s vision. Hauer was, and remains all these years later, enthralled with this film noir of the near future.