After the Roger Moore movies had, slowly but surely, descended to an almost farcical level thanks to the humour taking more and more precedence and Moore, to be frank, just getting a bit too old for the physicality that the role required it became clear that it was time for new blood. And so it was time for Timothy Dalton to put his stamp on the character (going with the traditional theme in the series, Dalton had been considered earlier as a potential Bond but fate meant that he had to wait a while), in two movies that can still be viewed nowadays as flawed but great adventures. There were new villains to be chased down and the political climate of the world made it more important than ever to get 007 bang up to date. The Living Daylights is fairly enjoyable, though lacking in truly great moments, but Licence To Kill remains one of my favourite Bond films and, arguably, still the most brutal of the entire franchise (though Quantum Of Solace comes close and I eagerly wait to see what Skyfall brings). 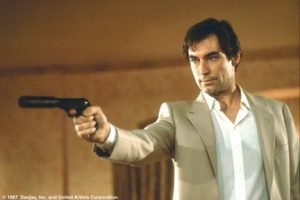 The movie that introduced Timothy Dalton to the role is a bit of a mixed bag. On the one hand it is a great adventure with a bit of grit to it and an update of the character that kept him moving with the changing times but elsewhere there is unease and a sense of not quite knowing how to move from those Roger Moore adventures to something a lot more serious in tone. The fact that it comes together to be such an enjoyable Bond movie is due in no small part to a great cast that features Dalton finding his feet in the lead role, Jeroen Krabbe, Joe Don Baker and John Rhys-Davies as potential villains, Art Malik having some fun and Andreas Wisniewski as an efficient killer.

We first meet the new incarnation of Bond on a training exercise in Gibraltar. Unfortunately, someone has decided to up the stakes and the people involved in the exercise aren’t just killed in a pretend manner – they’re goodly and properly murdered and it’s up to Bond to realise what’s going on in time to save his own life and put a stop to the killer. After this exciting opening sequence we get to the main story – a defector from Russia (Jeroen Krabbe) wants some help and protection from other governments in exchange for information about an ex-comrade (John Rhys-Davies) who has gone off at the deep end and is killing numerous 00 agents. Bond starts to consider the fact that the information may be bogus and that the defector is arranging things for his own benefit. With the help of an attractive young lady (Maryam d’Abo), he sets out to find out if there is any truth in the tale and, of course, to try and save the day.

Timothy Dalton was a very good Bond but the late 80s were a difficult time indeed for the franchise. The character was misunderstood, viewed as a relic from a bygone age before the majority of fans were able to convince the naysayers that the character was, in fact, simply a constant. He was a creation unaffected by the turbulent swings and roundabouts of reality. He shouldn’t have to worry about the health worries caused by smoking, the rise of AIDS and other sexually transmitted diseases or the rise and rise of political correctness. Changes in global politics and international relations CAN, and do, affect the character but the actual 007 DNA should never change, for better or worse.

This adventure, and the next one, may somehow feel as if they are missing the essence of the character but they still tick plenty of the boxes and are still very good films (particularly the second Dalton outing, which remains the most violent Bond movie to date). John Glen directs this outing with competence and looks to have done his level best during a strange period for Bond as a character and, indeed, as a franchise. 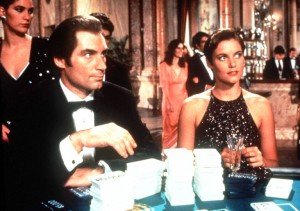 Perhaps even more interesting to watch nowadays than it was back in 1989, when audiences may not quite have been ready for it, Licence To Kill is a Bond movie that I remember enjoying a lot. I remember it being impressively gritty and interspersed with some great action moments, including a finale that mixes the brutal with the absolutely ridiculous to make for some of the best moments in the entire franchise, as far as I’m concerned. Rewatching the movie today, it turns out that my memory is absolutely correct. There are elements that sit uncomfortably in the mix, with the worst offender being the way in which political correctness insisted on a stronger female figure than had been seen in the past – that’s no bad thing when done properly, and has since been improved upon in later Bond outings, but it’s a) very bad when it’s done as clumsily as it is here and b) dismissive of the many Bond girls throughout the franchise that have been more than just eye candy, from Honey Ryder to Pussy Galore to Octopussy herself and even the slightly scary Mayday (all strong women, I’d argue, who also happened to be quite beautiful).

The story sees Bond going rogue after an attack on his friend Felix Leiter on the day of his wedding. Felix is hospitalised and his lovely bride is killed, all at the behest of the dastardly and powerful drug-dealer Sanchez (Robert Davi). Bond wants Sanchez to pay for his crimes but the other government bodies after him don’t care about the recent deaths when there is a much bigger picture to look at. Bond, angered by this, has his licence revoked and sets out to destroy Sanchez’s empire with a cunning plan that sees him playing a very, very dangerous game with everyone involved.

As well as Robert Davi being a great villain, Licence To Kill boasts impressive performances from Benicio Del Toro as a nasty henchman, Anthony Zerbe is as great as usual playing someone in business with Sanchez, Carey Lowell is a tough and gorgeous woman who might be able to help Bond and Talisa Soto is just one of my favourite Bond girls ever. I fell in love when I was 14 years old and sometimes that love doesn’t fade away. As for Dalton himself, there’s a great mix of the cool and suave and then the determined and dangerous. The twinkle in his eye can change to a steely glint mid-scene and it’s wonderful to see.

There are some decent moments throughout the movie, and some real nastiness, but it’s only in the standard big finale that all of the stops are pulled out and director John Glen goes all out, putting onscreen some action sequences that stand up as some of the best of the franchise, and easily the best of the 1980s Bond adventures.

Watching the movie now, and still enjoying those amazing action sequences, it’s hard to figure out just why audiences decided to abandon Bond at this stage. Maybe the world just wasn’t ready for the grit that would appear again in later Bond movies to greater effect. Perhaps Dalton wasn’t ever quite right for the role, in the eyes of many. Perhaps there were just too many changes that turned off the hardcore fans, omissions from the franchise that would return in the Brosnan era even while so many other aspects of the character and his world were being subtly reinvented and/or subverted.

Whatever the reason, less people turned up at the cinemas and so Dalton hung up the tuxedo after this outing. Strangely enough, everything has a way of working out just right for the benefit of Bond throughout the years and this would seem to be no different. The hiatus eventually led to the character coming back bigger and bolder than ever and fans would always have this movie to keep in their collections and rewatch as often as they wanted to, hindsight allowing them to appreciate an absolute zinger of an action movie.