The only two “official” Bond movies to have been made outwith the official 007 franchise came about under very different circumstances. Casino Royale, a spoof of the Bond movies, was simply a case of someone having bought the rights to the book and being able to capitalise on the situation when Bond became a household name. Never Say Never Again, on the other hand was made as part of an agreement reached in order to placate writer Kevin McClory, who had collaborated on a story that was intended to be the first Bond movie in the series but that was put aside until Ian Fleming turned it into Thunderball. McClory managed to secure a deal that allowed him the rights to remake Thunderball based on the original material and the official 007 franchise would no longer make use of SPECTRE or Blofeld after Diamonds Are Forever (the famous pre-credit sequence in For Your Eyes Only doesn’t name the character but audiences can gather who it is). Perhaps one day SPECTRE and Blofeld will return to menace Mr. Bond, thanks to some canny purchasing deals by the owners of the official franchise, but we’ll just have to wait and see. The rumours are already starting, as ever, regarding Bond 23 and just who the villain of the piece will be. Regardless, that doesn’t detract from the fact that these two movies remain very definite oddities in the world of Bond, James Bond. 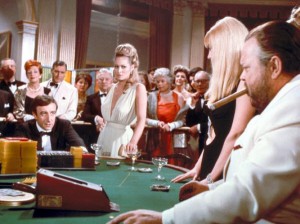 Casino Royale is a bizarre, sprawling mess of a film. With no less than a half dozen people involved in directing the thing (Val Guest, Ken Hughes, John Huston, Joseph McGrath, Robert Parrish and an uncredited Richard Talmadge) and, seemingly, everyone and their uncle lending a hand with the screenplay it should come as no surprise.

There is some fun to be had, in between the dated swinging sixties moments and the bad overacting. Peter Sellers is almost always amusing, David Niven tries to hold on to his dignity while those all around him are losing theirs and Woody Allen (as young Jimmy Bond) has some decent one-liners. And Ursula Andress is more gorgeous than ever. But then you have poor Deborah Kerr mangling her accents and not doing all that well with the comedy and Joanna Pettet given a character that you don’t really care about. A number of cameos add to the feeling that people were having more fun making the thing than audiences will get from watching it.

The soundtrack is quite groovy, with work from Burt Bacharach, Herb Alpert and “The Look Of Love” sung by Dusty Springfield.

There’s also some great design work in the second half of the movie. A household in Berlin is a triumph of skewed German Expressionism while the secret lair investigated during the grand finale is a mix of minimalism and optical illusions, all highlighted with great lighting and colour schemes.

This curio is worth your time if you’re a James Bond completist and want to see a 007 movie that also features Ronnie Corbett, Bernard Cribbins, Derek Nimmo, Jacqueline Bisset and a wonderful Peter O’Toole cameo. But it’s simply too bizarre to be viewed as a seriously good film. 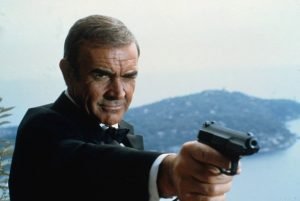 Aside from the original Casino Royale (1967) movie, this remains the only other official James Bond movie outside of the official, ongoing 007 franchise. Which is a good thing. Because it’s rubbish.

Sean Connery returns one last time to the role that he made his own and he’s the best thing about the film. Yes, he may not look quite as sprightly as he used to but he still has the charm and still convinces in the physical side of the role. The plot is a reworking of Thunderball, a big baddie has stolen two nuclear warheads and holds the world to ransom. That’s all you need to know. Max von Sydow plays Blofeld in a few scenes, Klaus Maria Brandauer is Maximilian Largo, Barbara Carrera is Fatima Blush and Kim Basinger is the beautiful Domino. Edward Fox plays M, Rowan Atkinson appears to provide some comic relief and Alec McCowen is atrocious as “Q”.

The screenplay by Lorenzo Semple Jr, based on the story co-written by Kevin McClory, Jack Whittingham and Ian Fleming, isn’t all that good. The chirpy cheekiness of Bond seems out of place when he’s not surrounded by all of his usual friends and co-conspirators and the action beats are too few and far between (an early fight sequence with Pat Roach providing the muscle mixes in some humour and falls quite flat). Perhaps the big scene between Bond and Largo sums up what is essentially wrong with this movie as a Bond film – the two men compete on opposite sides . . . . . . . . . . . . . . . . . . . . . . . . . . . . . . . . of a videogame.

Irvin Kershner directs with little flair or feel for the things that make a James Bond movie a James Bond movie. It doesn’t help that there’s no standard pre-credits sequence and that the film is saddled with the worst theme song in the history of Bond soundtracks.

And the fact that almost everyone onscreen was played by someone much better in Thunderball (Adolfo Celi was a better Largo, Claudine Auger was a better Domino, the gorgeous Martine Beswick was in the mix and we had, of course, Lois Maxwell, Bernard Lee and Desmond Llewelyn too) really just highlights the sad truth – this was an unnecessary Bond movie simply made because the rights to the story were won as the result of legal action. And that’s no reason to make a film, surely