by Žad Novak
in Spotlight

How does one even begin to write an article about Tilda Swinton? Words almost seem insufficient, even inadequate, to capture the essence of an actor so expressive that they can carry a whole two-hour film on their back while only saying a few lines and avoiding melodramatic acting? But still, words are the only tools we have to honour this grand actor and so, for her 58th birthday, we made a list of some of her best feature films. 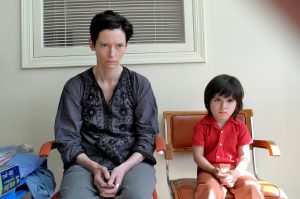 We Need to Talk about Kevin is a thought-provoking story of a mother coming to terms with the fact that her teenage son is a psychopath guilty of a school massacre. In a collaboration with the Scottish director Lynne Ramsay, who is known to make full use of the cinematic language, Swinton poses difficult questions about (unwanted) motherhood and guilt almost solely through the use of her body’s posture. Specifically, many scenes in We Need to Talk about Kevin, such as when Eva Khatchadourian (Swinton) finds her son Kevin (Ezra Miller) masturbating in the bathroom, masterfully rely only on actors using eye contact to establish the tension between the characters. This use of cinematic language perfectly showcases Swinton’s talent and craft, as well as that of Miller and Ramsay.

It goes without saying that FlickFeast gave We Need To Talk About Kevin a full five stars in three separate reviews!  Check them out here in 1, 2, and 3.

Oh, Burn After Reading. Some people love this Coen brothers’ classic and some simply cannot stand it. But no-one can deny the sheer brilliance of Brad Pitt’s dance moves nor the utter shock when – spoiler alert – Tilda Swinton’s “cold, stuck-up bitch” of a character, a woman that would scare just about anyone with her cold stare, turns out to be a paediatrician by calling.  Katie Cox is one of the least likeable characters in film history – there is simply nothing endearing about her. Yet, there is something intriguing in Ms. Swinton that keeps the audience glued to the screen, not even hoping for her demise. As Katie Cox is the only major character in this ensemble film that wasn’t written with a specific actor in mind, it is fitting to say that Tilda Swinton’s casting was the cherry on the top. 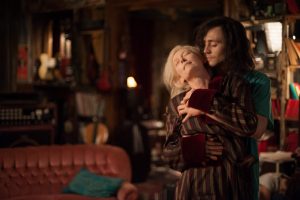 There are a couple of directors with whose Swinton’s name is often connected and Jim Jarmusch, the jazz poet of contemporary cinema, is one of them. Only Lovers Left Alive is their third collaboration, preceded by the absolutely hilarious Broken Flowers (2005) and the not-so-successful The Limits of Control (2009), and with the fourth film, The Dead Don’t Die, currently filming. The 2014 tale of vampires with Swinton and Tom Hiddleston is a film in which hardly anything happens. The focus is rather on the day to day thoughts on life and love; with the vampire background being used to give the characters a vast experience in both areas.  As opposed to the cold-hearted Katie from Burn After Reading, the vampire Eve (Tilda Swinton) is a character showing true warmth and preoccupation, communicating them with body language as much as with words. And as can be expected from Jarmusch, all this is done in beautifully weird but never overdone aesthetics. The very mixture of intellectual inner-world and the carefully created artistic outer appearance is highly reminiscent of Swinton herself (and her good friend David Bowie) which is why Only Lovers Left Alive is a must on this type of a list.

There are, of course, many other films that one can add to the list, from Michael Clayton (2007) for which Swinton received an Oscar, to The Grand Budapest Hotel (2014) in which she performed under a considerable prosthesis to make herself look extremely old. Tilda also graced the screen with her Ancient One in Doctor Strange (2014). Moreover, there is the upcoming Luca Guadagnino film (another of Swinton’s frequent collaborators – their first film together was FlickFeast’s beloved I Am Love back in 2010) with a triple role for Swinton.

Have we missed your favourite performance of Tilda Swinton‘s? Anything that’s typically overlooked? Let us know in the comments below.