Chinese Puzzle is the newest feature from French director Cedric Klapisch. It’s a sequel to his previous films L’Auberge Espagnole (2002) and Russian Dolls (2005), serving as the final instalment of what’s commonly referred to as the ‘Xavier Trilogy’. In celebration of the film’s cinematic release in the UK (20th of June and onwards), we had a brief talk with Cedric in the interview below about his latest venture.

Flickfeast: First of all, for our readers unfamiliar with the ‘Xavier’ trilogy, what do they need to know about Xavier as a character and about his past events in the previous two instalments before they see Chinese Puzzle?

Cedric Klapisch: That’s a good question, but I think the answer is in fact, nothing. I conceived this third movie as one that could be appreciated as part of a trilogy, but also a standalone experience, it’s very self-contained. In fact, I think it may be more interesting seeing this instalment, then backtracking to L’Auberge Espagnole and Russian Dolls. I feel as if it’d be more intriguing to at first see Xavier as this grown adult in Chinese Puzzle, before looking into his younger, earlier self. 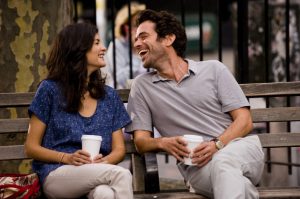 CK: Yes of course, I think all three films are that, the first one was very much about Europe, and the birth of a unified European spirit, or of that generation of people. Clearly it’s a very different time for Europe, today. As you said – a world movie – we’re in a period where worldwide is the scale for everyone, we have to deal with a worldwide market, the internet, the information we have. Everyone knows about everything – reacts with it – it’s really a different period, with all the interconnectivity, cellphones and television. The world has never felt more whole.

FF: Chinese Puzzle seems to draw from traditional French melodrama, but also from American humour and drama. Do you think your own personal style is a combination of American and French cinema? Would you say that you have particular influences from the likes of Jean-Luc Godard and Woody Allen?

CK: Well, yeah, of course Woody Allen is someone who is so important to cinema, and you can’t really situate your film in New York without thinking about his influences. Yet, there is something in the British cinema, where you can be both serious and funny at the same time, much like Italian cinema. For me, I find that when comedy is full of just meaningless laughs, there’s something missing. I need content, something deeper beyond the humour driving it forward. Conversely, if it’s just too serious, that’s also missing something. Life is funny and not funny.

FF: To conclude, if you were to describe Chinese Puzzle in just 5 words, what would they be?

Chinese Puzzle is out in UK cinemas as of the 20th of June.