Born on 13th June 1981 in Boston, Massachusetts, Chris Evans’ old fashioned good looks and effortless charm set him up well to be a movie star. In a career of highs and lows, Evans now looks to have cemented a place in the big leagues with his recent Marvel successes. To celebrate his birthday we look at 5 of Chris Evans’ best performances. 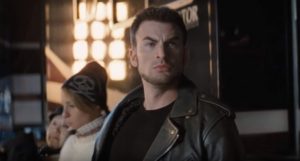 Edgar Wright’s 2010 adaptation of Bryan Lee O’Malley’s graphic novel sees Scott Pilgrim taking on his new girlfriend’s seven deadly exes. Chris Evans stars as Lucas Lee, evil ex number 2, a skater turned action movie star. Riffing on numerous clichés of Hollywood stars, Evans steals his scenes with his over-the-top performance. Knowingly and unflinchingly cheesy, this could have been a scenery chewing disaster but thanks to his innate charm, the performance is huge fun. The character is on screen for under ten minutes but leaves a lasting impression.

While not the best film in his back catalogue by any stretch of the imagination, The Losers allows Chris Evans to show his comedic chops. Based on Andy Diggle and Jock’s graphic novel, The Losers sees Evan’s Jensen as part of a covert CIA team betrayed and left for dead by their handler, forcing them to band together to exact revenge. Jensen is the team’s tech specialist: sharp of mind and sharp of mouth whilst Jensen provides the comic relief throughout the film. Aside from the humour we also get to see a more vulnerable side to Jensen through his love of his niece. Throughout the film Jensen makes reference to the fact that he keeps up to date with his niece’s football (soccer) team via the internet and at the end of the film we see him and his unit attend a match. While played mainly for laughs this allows Evans to display a softer side to what could have been an out-and-out caricature. The obvious love for family adds a great warmth to Jensen and makes us love him all the more. 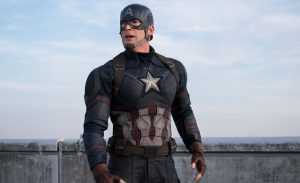 It would have been very easy to dismiss any Captain America performance from this article. It’s perhaps too obvious a pick; but for good reason. Chris Evans was seemingly born to play Captain America. The third of the Captain America films sees friction between Steve Rogers and Tony Stark as political interference sparks a conflict between Captain America and Iron Man on how the Avengers should be run. Not only dealing with the rift with Stark, Cap’ also has to deal with the fact that his friend Bucky is being set-up by the film’s antagonist, Zimo. Civil War is so rooted in this soured relationship that any bum performance would sink the ship. Thankfully, Evans delivers what could arguably be his best performance to date, certainly his best Captain America performance. When the showdown between Iron Man and Captain America finally arrives, rather than being excited for it, the audience is dreading what may come and what these two old friends may do to each other. It is a fight that means something, not only to the combatants but to the people who have been invested in these characters for years. A highlight of the Marvel Cinematic Universe thanks, in no small part, to a sparkling Chris Evans performance. 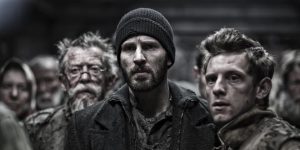 Still to receive an official UK release, Snowpiercer has become a cult classic on the home entertainment import market. Set in a frozen future where the remnants of mankind survive aboard Snowpiercer, a train that circumnavigates the globe, Evans’ character Curtis leads a rebellion against the class system which has arisen aboard the train. From the outset Curtis is set up as the hero and point of audience identification but throughout the film we are shown that Curtis may well not be the hero we expected. Firstly, allowing his good friend Edgar to be killed so as to capture Tilda Swinton’s Minister Mason, then later we learn that in order to survive, Curtis has eaten human babies. These moments of barbarism, through the prism of Chris Evans’ performance gives the film its heart. Curtis is a man who will do anything to survive and the ambiguity of whether this is through altruism or self-interest is what gives real depth to the film. 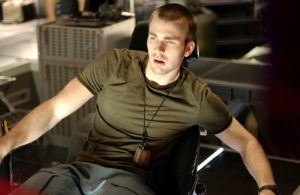 Danny Boyle’s underappreciated sci-fi film from 2007 sees a team of scientists aboard the Icarus II sent on a mission to reignite the dying Sun. The first mission attempt was a failure and the crew of Icarus were lost. Evans plays Mace, Icarus II’s engineer. At first glance, Mace appears cold and somewhat aloof; his sole focus is the mission and any deviation from the set plan is unacceptable to him. As they approach their goal, Icarus II locates a distress call from Icarus and when presented with the option of a rescue mission to save potential survivors, Mace rejects the option out of hand. Evans’ multi-layered performance allows the audience to see that Mace’s unwavering morality is not coldness towards his fellow crew but an unflinching desire to save loved ones on earth. It is easy to see why Chris Evans cites this as one of the films he is most proud of.

“If you want to be around in ten years you have to do something to differentiate yourself from the pack.” – Chris Evans.

He may always be remembered for Captain America but true to his own words, Chris Evans has a wide variety of different roles in his back catalogue. Equally adept at comedy and drama, the future bodes well for Evans and having attained his place among the A-listers of Hollywood, he now has his pick of future projects. Whether in front of or behind the camera, great things can be expected from Captain America.

What’s your favourite Chris Evans performance? Let us know in the comments below