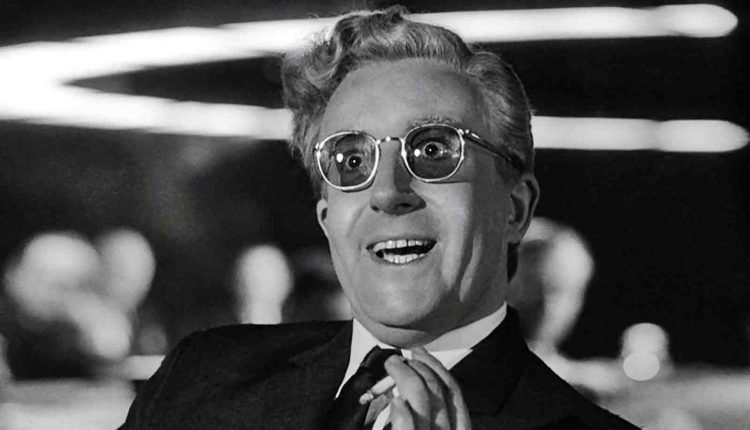 Back when #KubrickFeast was nothing more than a glint in its daddy’s eye, Flickfeast went all-out with a feature on the Top 10 Final Film Scenes of all time. It should go without saying that Stanley Kubrick’s Dr Strangelove or: How I Learned to Stop Worrying and Love the Bomb was riding high in that list:

Some of the most iconic and memorable scenes to emerge from the history of cinema are those that come right at a film’s close. In a climatic final scene, even the worst of films can redeem itself with a powerful or imaginative ending. From head scrambling twists to poignant heart-string pullers, a good final scene can elevate a film to otherwise unattainable levels of notoriety. So, with a great big *SPOILER ALERT* in mind…

Dr Strangelove or: How I Learned to Stop Worrying and Love the Bomb, Stanley Kubrick’s comedic masterpiece, is blessed with an abundance of memorable scenes, and in its final moments proves to be surprisingly moving. After the inevitable countdown to nuclear oblivion finally reaches its end, the demented Dr. Strangelove, until now wheelchair bound, rises to his feet and takes a few tentative steps. “Mein Fuhrer,…..I can walk!”

With this bizarre revelation, the doomsday device activates and suddenly the farce is all over. What follows is a haunting montage of mushroom cloud explosions accompanied by Very Lynn’s bittersweet wartime hit ‘We’ll meet again.’ After making one of the most ludicrously funny films of all time, it was testament to Kubrick that he could still provide an ending of genuine poignancy. His original ending, of which only stills have yet emerged, saw the war room break down into a childish pie-fight. Whilst the symbolism would have been suitably apt, it’s fair to say Stanley made the right choice with the montage, providing a powerful Cold War critique.

Does any another Kubrick ending trump Dr Strangelove? If so, let us know in the comments below.