Handpicked by the Edinburgh Film Festival ‘young programmers’ team, the Teen Spirit Shorts programme collected the best in international short films representing teenage experiences across boundaries of class, religion and history. As one of the only (non – animated) shorts programmes I caught at the festival this year, the sheer talent and positive audience reception was testament to the universality of the teen experience, identifying promising talent and showcasing original, eclectic, and evocative film making.

The first film of the programme Tryouts (Susanna Caseres) was an inventive story, exploring the collision of religion and high school acceptance in the narrative of a Muslim teenager’s desire to become involved in a cheerleading squad. With her religion requiring her to wear a head – scarf, the film explores how the simple garment affects her friendships and psyche in contexts of direct and indirect discrimination. As an emotive, headstrong film with a strikingly executed twist showcasing ambiguous acts of teen rebellion, director – screenwriter Caseres managed to encapsulate the wider societal issues of integration and teen belonging within a familiar American high – school setting with nuance and intelligence, producing a film with emotional and political bite.

The second film of the programme American produced Half Sour initially opens in a skate video aesthetic, as a group disperse within a cavernous empty warehouse before randomly cutting to a montage of different recipes of jarred pickles. Skateboarding and pickles consequently collide as directors Sean McGing and Mary Ann Rothberg’s documentary profiles a group of young disillusioned teens who bond together to form a successful pickle business based in New York. As each member of the business talks about how they got involved a picture of brotherhood and family emerges, beautifully exploring how the business brought them closer together and in many cases saved many troubled teens from themselves – even if some of them ‘absolutely hate pickles’. As a doc that grasps emotive testimony from the strangest of concepts, Half Sour was a doc with heart and in the same style as Vice profiles, provided enlightening perspectives on people and sub – cultural lifestyle choices.

Letter From an Old Boy

As a piece re – creating World War 1 trenches on a tight budget, Letter From an Old Boy explored the stories of orphaned Scottish soldiers and their letter correspondence with the Moray children’s home from the frontlines. In combining a series of emotive voice-overs based on archival letters, director Michael J Ferns produced a powerful short dramatizing the emotional correspondence that tied many young soldiers to home, a simple act that helped them to survive the hellish existence of trench warfare. As a film with great sound design and an emotive core, Letter From an Old Boy was a microcosmic snapshot of teen orphans experiences and because of this focused creative direction it provided a needed alternative perspective to the historical tapestry of WW1 dramatisations.

Returning to the fabled battleground of pre – pubescence Rinio Dragasaki’s Greek short Schoolyard envisions a hyper stylised water fight between children taking an ugly Lynchian turn. As a film that emanates rich colours, beautiful slow motion visuals and a haunting dissonant soundscape, Dragasaki’s film explores how a school playground battle can represent something more sinister. With the film descending from water fights to book burning, aggression and anger possessed faces, perhaps the rise of the ultra – nationalist Golden Dawn party in Greece informs the film as an audio – visual descent of people into anarchic fascism. Lest we forget The Wave (2008)

Moritz and the Woodwose

As a mixture of social awkwardness and sheer ignorance when one of Youth Programmers introduced Moritz and the Woodwose as ‘fairytale stuff’ it seemed a misplaced insult to director Bryn Chainey, as his film was most ambitious and realised cinematic film of the programme. The story essentially follows a child struggling to cope with his brother’s dialysis treatment who ventures into the woods, coming into contact with a mythological creature trapped within a tree who has the ability to solve all of his problems … at a price. Channelling elements of Pans Labyrinth – with the films creature being based on the same folkloric figure that inspired Guillermo Del Toro’s faun – Chainey’s film is combines digital and practical effects in a dark, though provoking and incredibly impressive film. Although Chainey refused to reveal his budget and was quite a sardonic character, there was undeniable talent on show here and I look forward to seeing what he creates in his upcoming feature film. 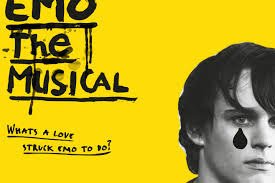 The final film of the programme Australian production Emo: The Musical (Neil Triffet) was a much needed slice of Flight of the Conchords style concept songs, chronicling the relationship between a dark – souled emo and a devout catholic. While it’s personally difficult for me to engage with the piano ballads and theatrical vocals of musical theatre, the dissection of teen belief systems and high school acceptance was thankfully hilarious, with the catchy musical numbers satirically ripping into sub –cultures and teen relationships with a witty edge. A film fit for a quick chuckle but any more than 16 minutes and I can imagine the formula getting a little grating. Case in point? Glee.