Empire Magazine’s ambitious efforts to create a glossy and endearingly unique film festival arrived last weekend under the guise of Empire Big Screen. Billed as a live movie event that promised to bring Hollywood to London, hordes of eager cinema patrons flocked enthusiastically towards the capital’s Millennium Dome O2 arena to take part in this celebration of the medium. However, this attempt to recreate the renowned studio showcase of Comic Con was marred with numerous issues, most prominently ticketing problems with both guests and staff unclear as to how the complex allocation of events worked. Yet despite these teething troubles there was plenty for movie fanatics to enjoy. 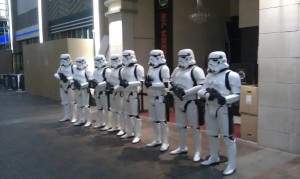 The event included numerous studio showcases, complete with trailers and unseen footage of this year’s most anticipated releases. 20th Century Fox, Universal, Disney, Icon and many others were all in attendance promoting their films. Highlights included a sneak preview of Tinker, Tailor, Solider, Spy (fuelling the already palpable level of excitement its suspenseful trailer has so far evoked) plus there was plenty of talk regarding a rather controversial and graphic (but impressively shot) scene of ultra violence from Nicolas Winding Refn’s Drive, which both enthralled and disgusted in equal measures. An extended clip from the new Puss In Boots film surprised many with just how inventive and humorous it was (although a mild degree of scepticism remains as to how the completed film will turn out) and crowds cheered with delight at a brand new trailer for Joss Whedon’s Avengers. There was a brief moment of quiet contemplation shortly after audiences witnessed footage of David Cronenberg’s intellectual drama A Deadly Method, about the intense relationship between Carl Jung and Sigmund Freud (However, this was partly down to the majority of people trying to decipher just what accent Kiera Knightly was attempting to re-create). 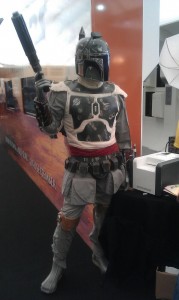 As to be expected these panels weren’t exclusively filled with high calibre offerings. There were countless moments where mumbled sniggers overpowered the polite applause which followed certain moments of particularly lacklustre footage. There was a noticeable disinterest for Justin Timberlake’s new star vehicle, In Time, a film with an interesting old-school Science Fiction premise which unfortunately looks to be far too stylised to successfully capture the majesty of the genre’s seventies golden era. In this dystopian, MTV version of the future, the world’s population can only live until they’re 25 (never aging past that point) and must ‘earn’ time (which has now replaced money as the main form of currency) if they wish to survive beyond this age. Despite some genuinely humorous moments it’s hard not to see past the overzealous attempts to appear cool, resulting in a film which looks like nothing more than a glorified Logan’s Run rip-off. Other dubious future releases included The Devil Inside (or The Blair Exorcist Project), Footloose (A misguided reboot that plays out like an oversexed Glee), Abduction (a blatant teen fiction adaptation of Ludlow’s Bourne stories) and Disney’s Real Steal (a pointless attempt to create a family friendly version of Rocky which looks like little more than a glorified Rock’em, Sock’em Robots film). 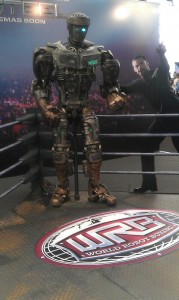 There were also numerous film screenings at Empire Big Screen, many of which were European premiers. The biggest films in attendance were undoubtedly Conan the Barbarian 3D, Fright Night 3D and Cowboy and Aliens in lowly 2D (Reviews to follow). However, those lucky enough to nab themselves a ticket to the second night’s ‘surprise film’ were treated to a special screening of Drive, unanimously declared by most of the press as the best movie of the weekend. Other films of interest were Kevin Smith’s horror flick Red State, about a deep south religious cult who take their beliefs well past the point of extremism. There was also the surprisingly delightful Friends with Benefits which allowed Justin Timberlake and Mila Kunis an opportunity to ‘act’ as if they’re sexually attracted to each other. Disney’s The Help starring Emma Stone as a young journalist fighting for affirmative action and comedy romance Crazy Stupid Love were also shown, receiving much encouraging praise, but if you were prepared to search beyond the Hollywood blockbusters you may have caught some of this year’s hidden gems including the hilarious The Guard, the phenomenally ludicrous Troll Hunter and Zombieland director Ruben Fleischer’s 30 minutes or Less. As well as previously unreleased features there were also numerous special screenings which included Stand by Me, the Scream trilogy (shown through the course of one afternoon), Don’t Look Now (complete with director Nicolas Roeg in attendance for a Q&A) and a plethora of other dearly loved movies, which, gave diehard fans an opportunity to once again (or in some cases for the first time ever) witness their favourite films on the big screen. 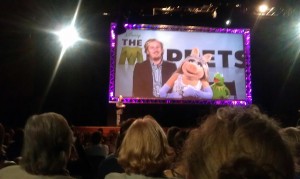 Numerous events and panels completed the weekend’s line up. Monster’s Director Gareth Edwards was on hand to help aspiring filmmakers with his Smack my Pitch Up discussion, whilst those looking to re live their childhood could attend a live Q&A with The Muppets where Kermit and the gang answered questions from the audience – Perhaps the most talked about and anticipated event of the weekend, with both young and old alike completely mesmerised by the opportunity to share a moment with these iconic puppets. Personally though I enjoyed nothing more than Animal Stars of the Movies, a delightfully mesmerizing and informative stage show which revealed many of the tricks used to coax these seemingly natural performances from Hollywood’s wildest film stars. Whoever said “never work with children or animals” has obviously never witnessed firsthand a parrot riding a miniature bicycle or physically seen a real life squirrel crack a nut shell and place its contents in a container on the other side of the room – a magical experience I’ll never forget. 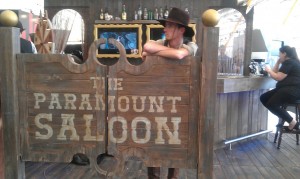 This mammoth event was held at the O2 arena, which, despite its ample space and convenient in house multiplex felt a bizarrely sterile venue for a celebration of all things cinema. Housed towards the furthest reach of this monument of ill-advised government spending was Studio City, a space dedicated to stalls and stands aimed to promote this year’s biggest new releases. Despite its underwhelming size (I’ve seen charity conventions with more atmosphere) there were some great opportunities to have your photo taken next to Car’s Lightning McQueen, or with your arm around one of Real Steal’s humungous fighting robots. The most popular however, had to be the chance for Star Wars fans to fulfil their childhood fantasies of becoming a Jedi Knight by having a picture of themselves taken wielding a lightsabre stood next to R2D2 and C3PO.

Whilst perhaps not the overriding success many had envisaged (mainly due to the severely poor organisation over the weekend which, resulted in an unavoidable atmosphere of irritation across the weekend) there were enough encouraging signs that hopefully the event won’t become a one off. With a few tweaks here and there, and a complete overhaul of the admissions system, fingers crossed we’ll all get another chance to enjoy a much improved Empire Big Screen next year. 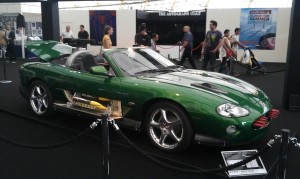 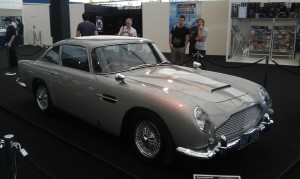