Common Decency and the Banality of Evil

Here are two compelling views of the opposite ends of the human soul. Both are highly dramatic and skilfully achieved, their goals in close quarters and similar fashion – one room, a group of men sitting around a table. In one, the life of a young man is at stake; in the other, the fate of an entire people.

Sidley Lumet’s directorial debut was the classic 12 Angry Men. Having earned a loyal following over the years despite lacklustre initial commercial appeal, it is now on most lists of Best American Films.  Staring Henry Fonda, this sweaty, smoky and profane one-room drama brought together a cast of some of the best actors of the day: Martin Balsam, Lee J. Cobb, E. G. Marshall, Jack Klugman, and Ed Begley.

12 Angry Men follows the jury deliberation of the fate of a troubled young delinquent charged with first degree murder in the killing of his father. The case against the defendant is powerful. During a shouting match overheard by neighbours, the kid screams a death threat at his abusive father, and later that night the father is found dead. One eye witness testifies to having seen the event through the windows of the passing city train as it thundered by between the tenement apartment buildings. Another witness swears he saw the young man run from the scene out of the front door into the night. The knife used in the killing and found on the body is rather distinctive, if not unique, and can be traced to the defendant. The alibi is flimsy.

The passion, prejudice and fury are nearly combustible in the sweltering crucible of the jury room as one man stands against mob justice. With time, as each man is challenged to look into his own heart, each sees the evidence in a new light. What was unquestionable fact is now in doubt. For some of the jurors, the transition is smooth, almost welcome; for one or two, the mounting peer pressure that there is reasonable doubt is a traumatic experience, a threat to deeply held bigotries. It is thrilling to watch as each bit of evidence is examined, reenacted and challenged. It is inspiring to watch something akin to nobility emerge in these common men, one after another, who finish their job and stay good-bye, their civic duty done. Justice achieved.

12 Angry Men is an unforgettable movie and a dramatic portrayal of common decency in as powerful a film as you will ever see. 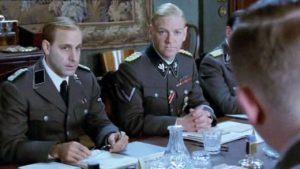 Hanna Arendt coined the phrase “the banality of evil” to describe the man who embodied the concept, Adolph Eichmann, in her account of his trial in Israel for crimes against humanity. The idea is that evil is not extraordinary but mundane, intrinsic to human nature and the human condition. She was fiercely censured at the time by those who wanted to think of men such as Eichmann as monsters. The man, the concept and the early history of the crime are stunningly portrayed in the movie, The Conspiracy. It is a superbly done drama about the Wannsee Conference, a meeting of senior Nazi bureaucrats, the elite of the Civil Service, gathered together to formalise the logistical fine points of conducting the “final solution of the Jewish question”. It is a chilling piece of history on film.

Other regimes have been responsible for the deaths of millions of souls, but none was as meticulous in its record keeping as the Nazis, or as loath to hide their acts behind alibis, such as famine attributed to implacable natural forces. (Shameless to the very end, only two of the members of the group at Wannsee repented later even as they faced the death verdict.) During a discussion of the “evacuation” program, an SS officer rises to speak: “I believe I evacuated several hundred Jews recently when I had them shot. Is that correct?” Heydrich replies matter of factly, “Yes.” Taking his seat, the officer remarks, “It is good to understand what words mean”.

The civilised world agrees that the Holocaust was as monstrous an evil as any that occurred in the twentieth century – a period stained by more than its fair share of atrocities – or even in the full, often bleak, record of human existence. There are degrees of evil, to be sure, but at some depth of wickedness, one searches in vain for a nuance.

The wonderful stage veteran, Kenneth Branagh, won an Emmy for his brilliant portrayal of SS General Heydrich, one of the main architects of the holocaust. Here was a man that no less an authority on cruelty then Hitler referred to as “the man with the iron heart”. Heydrich presided over the conference and, until his death not long after the meeting, the work of the final solution itself, earning another title, the Butcher of Prague.

Stanley Tucci won a Golden Globe for his role as the personification of banality in the person of Adolph Eichmann, the sycophantic assistant to Heydrich.

Loring Mandel, winner of the Patty Chiefsky lifetime achievement award by the Writers Guild of America, won an Emmy for bringing the dry bureaucratic transcript of the conference brilliantly to life.

The attendees of the conference had risen to the threshold of high power in the crucible of a fascist regime and are instinctively quite ruthless and territorial. They are not men who are accustomed to relinquishing autonomy easily. A couple of the attendees are prominent members of the party in their own right, most reporting directly to the inner circle of hell —Gobbles, Goering, Himmler et al.  This is the wolf pack that Heydrich is commissioned to bringing to heel. Eichmann would later reveal that Heydrich “expected the greatest difficulty” in enlisting so many to serve the cause of mass murder. It is a stain on the soul of humanity that this was not the case. The meeting lasted ninety minutes.

Heydrich (Branagh) is skilful in establishing the “primacy of his authority”.  “I would hate to see any of the bullies in the gestapo take too much of an interest in you.”  He warns  an inadequately staunch ally, Dr. Stuchart, in a private little stroll during a break in the meeting.

Conspiracy is historical drama in its highest form, gripping and instructive. I can only presume that exhaustive research preceded the deep insight that is evident in Mandel’s script. It is compelling viewing for anyone interested in history, good and evil, and the art of negotiating with the devil.