Welcome to Flickfeast’s Films of the Year 2018. Shall we get on? It’s nearly time to get the turkey in. First up…

John Krasinski’s directorial debut is a stunner. A Quiet Place is a perfect horror film. It’s intense, it’s unpredictable and it’s scary. It has a great conceit – a post-apocalyptic world where monsters attack those who make a sound, leading the characters to live their lives in near-silence – and features great characters to journey with. 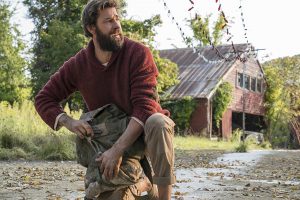 Performed impeccably by Kraskinski himself, Emily Blunt and their on-screen children Millicent Simmonds, Noah Jupe and Cade Woodward, they are a family we care about. Not to mention that Blunt is pregnant, which makes for one of the most intense moments in horror history. It’s a simple, but effective story of survival and one where every second will induce anxiety and put you on the edge of your seat.

For all its great methods of storytelling and genuinely frightening atmosphere, perhaps the best thing about watching A Quiet Place is that you have to be really, really quiet. There’s no time for loudly munching on popcorn, whispering to the person next to you or even having a sneaky sneeze. Depending on where you’re watching it or who you’re watching it with, it has the potential to be the perfect film experience.

A Quiet Place breathed fresh life into 2018’s horror offerings. In a year where we were treated to many a brilliant genre films, A Quiet Place undoubtedly takes the top spot for me. It’s a creature feature with bite and is an unforgettable, taut rollercoaster ride.

“When you dance the dance of another, you make yourself in the image of its creator”

This line of dialogue pointedly references the monumental challenge that faced Call Me By Your Name director Luca Guadagnino’s remake/adaptation of Suspiria in “six acts and an epilogue”. 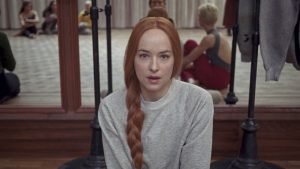 The story is set within the world of dance and Argento and Guadagnino’s two versions feel akin to two separate choreographers taking a different approach and adaptation to the text. Both are unique, wonderful pieces of work but also can exist within the same universe.

The result is the most spectacularly beautiful, terrifying and insane filmmaking you will see all year… and this is coming from someone who has Annihilation, Mandy and Hereditary in their Top Ten.

During one private lesson, Tilda Swinton’s teacher Madame Blanc tells Susie (Dakota Johnson), “There are two things that dance can never be again. Beautiful and cheerful. Today we break the nose of every beautiful thing”

Suspiria is certainly not cheerful and in the world of interpretive dance, there are many that will not like this interpretation of the material. But all art is subjective and while Guadagnino may break the beautiful face of Argento’s Giallo classic, from the broken pulpy mess that remains, he reaches in and molds it into something even more beautiful. The same heart reborn with a new visage that is, in this reviewer’s opinion, better than the original.

Yeah, I said it. In 2008, I found myself far from home with an evening to kill and a movie on-demand service. As a DC fan, Christopher Nolan’s The Dark Knight had given me a spring in my step so I ended up taking a punt; “Aww. Iron Man? Bless ’em.”

Fast forward through ten years, and with varied reactions to each MCU instalment thereafter, I found myself feeling. I felt something as several of the Guardians of The Galaxy drifted off into dust, even though I’d scoffed at Vol. 1‘s trailer, thinking Marvel were scraping the barrel. I felt something as Tom Holland’s Peter Parker disintegrated, although I’d rolled my eyes at the reincarnation of his character. And that was all whilst knowing that we’d see all of our heroes again.

The film’s finale floored the viewer and created a cinematic moment which had to be seen and was a pleasure to share, even for those who hate sharing the cinema. Stretching further, in a day and age where spoilers are rife, the ‘Thanos Demands Your Silence’ hashtag only served to heighten the intrigue.

But it’s not just about that dire denouement either. As the film’s villain, Thanos is nothing short of iconic: ruthless yet sympathetic to a point, maniacal yet near-believable in his motives. And by Odin’s beard, you want to see him get twatted.

Sure, the film has it’s flaws. Although eventually rewarding, Thor forging his new axe is full of false drama and soundtracked by yet another ridiculous accent from Peter Dinklage. The Hulk’s abandoned narrative arc is another guilty remnant of ‘Infinity Wars: Part 1′ syndrome and even the hefty run time can stop some characters from getting short shrift.

However, what we were left with was a cinematic event with a pay-off deserving of the decade it took to deliver. Oh, snap.

This might be a surprising choice but one film stood out this year is underrated drama Custody (Jusqu’à la garde) starring Denis Menochet. In only 93 minutes, Xavier Legrand took a simple, straightforward tale and added layers of complexities to elevate it to a harrowing and ultimately (albeit unexpectedly) terrifying tale – not bad for a feature film debut.

Another notable film this year for me is Crazy Rich Asians. With romantic comedies becoming progressively stale, Jon M. Chu’s adaptation of Kevin Kwan’s bestseller brought Asian representation into the limelight, as well as features glitz, glamour and a lovely balance of comedy and sweetness.

That my favourite film of 2018 came at the very beginning of the year may say more about the last 12 months of cinema than it does about the film itself. And yet, if I have to choose just one film to encapsulate everything that I wanted from a cinematic experience this year, it would be Coco.

It would take a lot more than 300 words to truly dissect what makes this my film of the year, but Pixar’s fantasy drama about a young boy who travels into the realm of the dead is nothing if not masterful in its storytelling economy. There is an ingenuity to Coco’s plot that makes this, arguably, one of the finest animated films of this century (so far).

A riot of lush visuals, exceptionally well rounded characters and real emotional truth, the film is a remarkably mature tract on death: never the most sellable of concepts in a film aimed at children. And yet, there is nothing morose or heavy handed here. Indeed, the filmmaking is delicate, focusing the tentpoles of family and the power of memory to make the complex themes palatable to audiences of all ages.

Moreover, its use of music is key to the story. I cannot stress enough just how important a step forward this is for animation, not to mention the musical genre in general, which often relies too heavily on songs that could easily be jettisoned.

In Coco however, the song Remember Me, which reverberates throughout the film like a motif,  is not only a fabric of the characters, but the crucial element that makes the plot work, the revelation of its origin so moving, in fact, that I have yet to get through one screening of this without bursting into tears.

Coco works completely, with a climax that is emotional rather than visceral, jettisoning Pixar’s standard template of ‘the final chase’ in favour of a third act laced with the bittersweet, that says more about that fine line between redemption and damnation, about family ties and the power of love, than most modern cinema can even dream of.

It has wit, intelligence, sensational music, a Frida Khalo drag act and a flying dog.

What more could you possibly want?

Which releases made your Films of the Year for 2018? Have we missed your fave? Or have we over-hyped? Takes us to school in the comments below.