Here’s Looking At You… Filmography

In our “Here’s Looking At You” spot we showcase the best, film-related, websites around. For starters, we are shining our spotlight on FILMography, the brainchild of Christopher Moloney, who uses his simple, yet brilliant, premise of overlaying film scenes in their real-life present day locations to produce some wonderfully engaging images. We caught up with Christopher to ask him a few questions about his work and to badger him into naming his ten favourite pieces….

Flickfeast: The mixing of film scenes with their real-life present day locations is a fantastically inventive and effective idea – how did you come to think of it and what possessed you to start FILMography?
Christopher Moloney: One day – about a year ago – I noticed that I work next to the spot where the Stay Puft Marshmallow Man appeared in “Ghostbusters.”  I wanted to show my friends, so I printed off a scene from the movie, held it up and snapped a photo.  I posted the shot online and my friends and family really enjoyed it.  So I did more.  Now I’ve recreated more than 500 scenes.

FF: I guess it is quite addictive?
CM: It is.  I find that when I watch movies now, I’m looking at the background a lot.  Examining the buildings and statues behind the actors.

FF: The process must be a very time consuming?
CM: It’s actually not that bad.  I watch movies on my laptop a lot and whenever I see a scene I “know,” I take a screen grab and throw it into a folder.  Then, when I know I’m going to that spot, I just print it off and pack it in my bag.

FF: As well as recreating film scenes in Canada and the US, you’ve recreated some in far flung countries including Italy and Vietnam. Are there any particular film scenes in any other countries that you would love to do?
CM: Britain is sort of my white whale at the moment.  I need to find time to get over there because I love it and so many of my favorite movies and TV shows were filmed there.  I would also love to do some scenes from “Mission: Impossible” in Prague.  And maybe some “Bourne” ones around Europe.

FF: Do you ever get any requests/commissions?
CM: Quite a bit, actually.  I have a button on my site called “Ask.”  A lot of people send their requests with that.  The shots I’ve done from “Gossip Girl” and “Glee” came from requests.

FF: You’ve exhibited your work at the Ischia and Cannes Film Festival, that must have been very exciting. Have you got any more exhibitions coming up?
CM: Recently I was in Canada (where I’m from) to attend the Toronto International Film Festival.  My photos were on display at the Grolsch Open House.  It was a lot of fun.  The organizers were very nice. 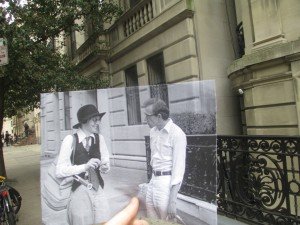 My favourite movie scene recreation I’ve done.  I received an email from a 14-year-old very excited that I had done this scene.  I was surprised to hear a teenager would be such a big Woody Allen fan but she explained the reason she liked it is because the building behind them is her school. 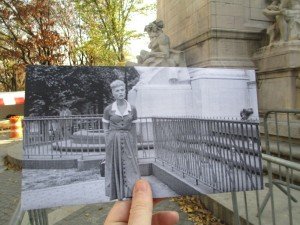 The statue right outside my office.  It’s amazing how many films have been shot here.  Whenever I think I’ve exhausted this location, I find another one. 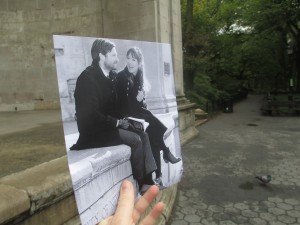 I saw this scene online about a year ago and thought it would make a good photo.  To be honest, I’m not even sure if this film was ever released.  I never heard about it again. 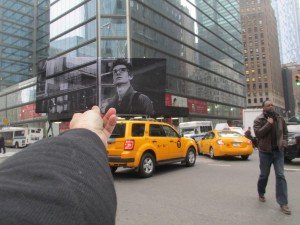 A bunch of kids asked me to do a photo from “Spider-Man.”  I pointed out that I had done a few.  They said, “Not the old one, the NEW one.”  That made me feel old. 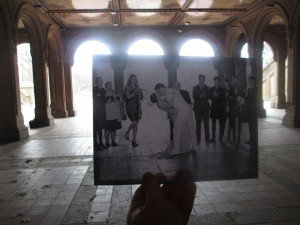 I get requests for “Gossip Girl” more than any movie.  I’ve never seen a single episode but I did this for all the people who kept asking. 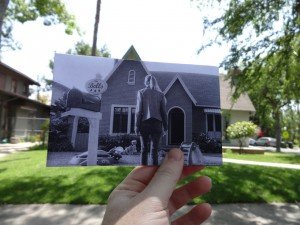 Recreating movie scenes in Los Angeles is so different than in New York City.  You have to drive places and actually go into neighbourhoods.  You definitely feel like you’re violating peoples’ privacy. 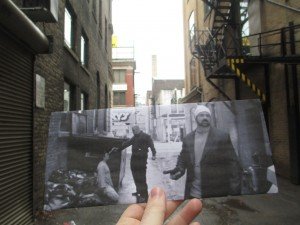 I walked past this alley every single day when I was going to school in Toronto.  I had no idea this film was shot in the area until I noticed the Henry’s sign behind the shooter. 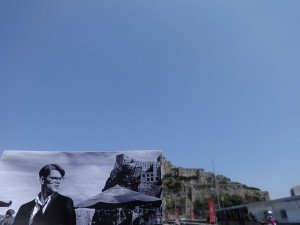 My photos were on display in the castle at the Ischia Film Festival.  It was very exciting for me.  I did a few recreations while I was there. 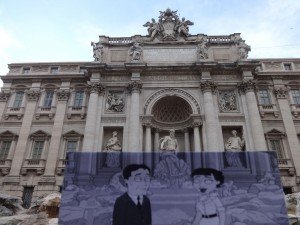 I printed off this scene on a whim.  Little did I know how well animated shows/movies line up.  The funny this is, I did a similar scene from the actual film and it wasn’t nearly as popular as this one. 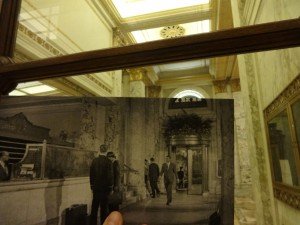 This scene was my “white whale” for a long time.  This half of the Plaza lobby is now part of the private residences and I couldn’t get in to do it.  But one day I realized I could pull off the shot through the window in the door.