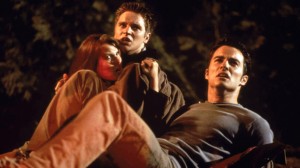 It is a rare thing for the horror genre to get something fresh and new and, while Final Destination does have elements that have been used before, this movie is a breath of fresh air for those fed up of slasher movies, zombie flicks (though who the hell would get fed up of zombie flicks??? not me for one) and the films we are seeing more often nowadays that like to show as many inventive methods of torture as possible.

The basic concept is simplistically brilliant: after a premonition of a plane explosion a bunch of teenagers and their teacher are removed from the plane, which then explodes. Having all narrowly avoided death it isn’t long before the Grim Reaper is working to correct the oversight, trying to pick off the survivors in the order they were originally supposed to die.

What this does is provides us with an excuse for some wonderfully protracted moments of tension while we see an invisible presence manipulating surroundings to help people shuffle off their mortal coil. There are jumps, laughs and moments of nastiness and it’s all shown with great flair by James Wong and Glen Morgan (two names previously best known, arguably, for their work on The X-Files).

The young talented cast are . . . . young and talented. Devon Sawa is a likable leading lad, playing the poor guy who is the only one seeing the dangers ahead, Ali Larter is a strong female presence and the likes of Kristen Cloke, Kerr Smith and even Seann William Scott all bring just the right qualities to their prospective roles. Nobody puts in a poor performance and there’s even an enjoyable cameo from Tony Todd that will please all fans of the Candyman himself.

In-jokery and foreshadowing also play a large part (eagle-eyed viewers should check out the paintings in the background of the airport “waiting room” sequence) and little touches like all of the lead characters being named after famous horror movie directors makes this an especially rewarding experience for fans of the genre.

Simply put, it’s a fantastic horror movie that feels very different from many other films churned out nowadays. That it led to numerous sequels of variable quality is only a sign of how great the concept is and they all have moments worth seeing. Though the original is still the best. 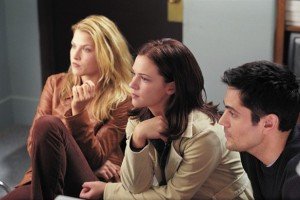 Making a sequel to a film as fresh and fun as Final Destination would seem to be a thankless task but director David R. Ellis, with the help of some screenwriters who know just what fans loved about the first movie, makes a good job of it in this entertaining slice of shock schlock.

This time around a young woman (A. J. Cook) has a premonition of a major highway crash/pile-up and saves herself, and those waiting in the traffic queue behind her. She soon realises that death wants the people who were supposed to die that day . . . . . . . but he seems to be working backwards on this occasion. Why? Perhaps a survivor of flight 180 (Ali Larter) will be able to offer some advice. If she’s in any fit state to do so.

This sequel works so well thanks to a wonderful sense of humour and a willingness to embrace the absurdity of the whole concept (best exemplified in a ridiculous scene in which characters realise just how they may be connected to those who were supposed to die on flight 180). It also has some of the best, and most entertaining, death scenes in the series. The set-ups are full of teasing tricks and fun yet leave the actual method of expiration something of a genuine surprise on each occasion.

There’s also a nice little extra factor hinted at, but not developed, regarding characters becoming temporarily invulnerable until it is their turn once more for death to catch up with them. It will be interesting to see if this idea is ever fleshed out as the film series continues.

The actors may not be the best around but there are some decent turns from Cook in the main role, Michael Landes as a cop trying to help, Keegan Connor Tracy and Lynda Boyd while everyone else provide totally acceptable performances, even if hampered with less likeable characters.

It’s fun, there is some nice foreshadowing once again, Tony Todd reprises his cameo role and the death scenes will make you wince and laugh with relief at the same time. Which makes this almost as good as the first movie, if only they hadn’t tried so hard to show things tying in to those original events. 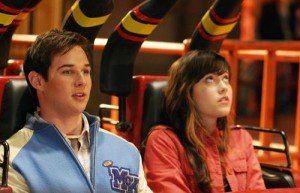 James Wong and Glen Morgan return for this third outing that adheres to the, by now obligatory, structure of premonition-avoidance of death-teens killed off-survivors trying to figure out how to avoid the plans that death has for them.

This time the big opener takes place on a rollercoaster. Mary Elizabeth Winstead plays the young woman who has the premonition and gets off, causing some trouble that sees others also following behind her (and having their lives saved, as a result). It’s not long until death starts trying to catch up once more.

Let’s face it, the biggest problem facing the Final Destination movies is how more far-fetched each subsequent instalment automatically becomes. There has to be the premonition tied in with some big disaster and then the lead character has to eventually realise what’s going on and try to convince others.
Final Destination 3 suffers from that, which is probably the biggest factor weighing against it. Otherwise, it’s a fun movie full of nice little touches and just as much foreshadowing as the first movie with the benefit of a decent cast of young stars.

Mary Elizabeth Winstead isn’t always entirely convincing in the lead role but she’s a cute and likeable presence and works with the material that she’s given. Ryan Merriman works well with her and shows a nice mix of bravery and fear as the situation worsens. Kris Lemche and Alexz Johnson make a great pair of cynics and give voice to some thoughts that audience members have probably considered. As for the others – Texas Battle, Chelan Simmons, Sam Easton, Amanda Crew, Gina Holden, etc – all do well, providing enough colour to stand out long enough while the shadow of the reaper falls over them. And it’s fun to have Tony Todd back, if only for a voice cameo this time.

James Wong directs as competently as ever, helped by a script that mixes humour with the horror and continues the playful, teasing tone that the previous instalments had accompanying each death. A lot of people think this is a lesser entry in the series but I still really like it. And it’s a hell of a lot better than the fourth instalment. 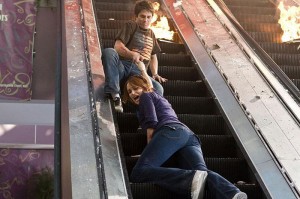 When Final Destination came along it brought something enjoyably fresh to the horror genre. The central concept (if you avoid death then death needs to rearrange his plans to get you) was great and provided an excuse for some ridiculously entertaining death scenes. As the series wore on it may have become a bit worn out but, thanks to some great use of everyday places/situations that inspire a small sense of dread, maintained a sense of fun and a high entertainment factor for fans.

Which makes it highly disappointing that this movie (released in 3-D in the cinema) feels rather dull and just like flogging a dead horse. This time around a young lad has a premonition that saves a group of people from a massive Speedway accident. So, as per the first three movies, death has to work hard to get them shuffling off their mortal coils.

There’s a fresh-faced cast of teens, some slightly older folk caught up in the fatal cycle and nobody really worth caring about in the slightest (Bobby Campo and Shantel VanSanten are the leads but it’s Justin Welborn, Krista Allen and Mykelti Williamson who make a somewhat decent impression). That would have been okay if director David R. Ellis (who also gave us the second Final Destination movie) had kept us happy with some ridiculously entertaining death scenes. One or two moments aside, he doesn’t, and the first “catch-up” death is particularly lame, possibly even the worst of the whole series. Although it was interesting to see the whole “not dying until it’s your turn” idea hinted at in the second movie being more realised here it was, sadly, once again rather wasted. And I won’t even tell you the words I used to express my reaction to a gag deliberately lifted from the first movie, and not half as effective.

I have enjoyed every one of these movies but really struggled to just let this one sweep me up and entertain me for its duration. There are some nice little references and in-jokes for fans, once again, but that’s about all it has going for it beyond that great central premise.

So that’s it until the 5th movie is released. How much longer can the series continue? I’ll keep watching them as long as they keep coming up with creative and entertaining death scenes, I know that much. Using, and toying with, common fears (flying, rollercoasters, the dentist, sunbeds, elevators) the series really exemplifies that notion of feeling at your most alive when reminded of your own mortality/being close to death. It may be a slightly warped type of fun but it’s still fun. I’ll be queuing up for my ticket when part 5 (pictured) is released. Though I definitely won’t be standing under anything that looks unsafe.