Fires on the Plain: An Interview with Shinya Tsukamoto

No one can accuse Japanese director Shinya Tsukamoto of being afraid of a challenge. Not only has he set his new film in the depths of the Philippine jungle during World War II, he also cast himself in the lead role as Private Tamura, a man tested to the limit. The end result is a strikingly visual film that disturbs as deeply as it enthrals.

Over in Venice for the 71st Venice International Film Festival where his film is competing for the Golden Lion, Shinya sat down to discuss how Fires on the Plain fits into the current political situation in Japan and just why he wanted to film in the jungle.

Fires on the Plain comes across very strongly as a message about the horror of war and a wakeup call to those who’ve forgotten. Was this your intention?

That’s what I was aiming for. Most of the people who have experienced war in Japan are getting older and dying so there is nobody left to testify to what war was. No one will understand the pain of war if there is no memory of it. With the current political situation in Japan, there is a danger that we might be led into a new war one day so I wanted to show people what this might mean.

What impact do you think the film will have in Japan?

I think there will be different reactions. Many people are anti-war but there are also those pushing down a path that could lead to the same situation as before. It’s important for me to present what war really means so that this is not left out of the debate.

Are you afraid the release in Japan will cause problems as the Japanese have not historically treated themselves as aggressors in this conflict yet that is clearly how it comes across here?

The political leaders in Japan will hate my film. There will be many who will understand it though and it is these people that I am trying to reach and to help experience what war consists of. 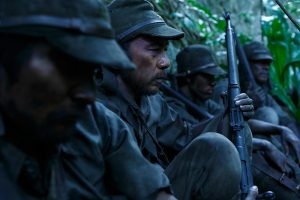 Do you consider this to be a political film then?

I wouldn’t say it’s a political film or a propaganda film. That was not my intention. I’m not asserting ideals rigidly. People can interpret it by their own political convictions as long as they understand the main point which is that we must avoid heading into another World War, something that becomes more likely if people don’t understand the reality of war.

The city has played an important role in your previous work. This is the first movie that takes place mainly in nature. Why this change?

Up until now in my movies I’ve been interested in the atmospheres surrounding a man living in big cities with nothing organic around him. In such a narrow space he has to feel if he’s still alive. It’s like if you wake up from having a strange dream, you have to touch and hit yourself to feel if you’re still alive. The city creates this very small and not organic reality. But I’m getting older and my interests are changing. I think of it this way. Before, I imagined a man floating into a jungle of concrete in a small boat. Now he’s floating into a natural jungle but he’s still the same man trapped in the same small space. It’s everything around him that’s changed.

So it’s not like many western war films where the jungle itself is the enemy?

Not at all. The jungle is not the enemy. It’s just the world around Tamura that he has to deal with. 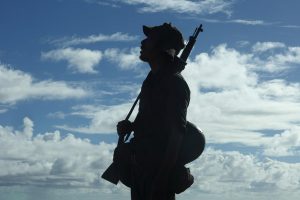 It’s a very visual film but one in which it’s hard to distinguish just who the enemy is at times. Instead, it feels like we are inside Tamura’s head seeing the confusion he sees.

Usually in war you see bad guys and good guys and we always think we are the good guys and the people we are fighting are the bad guys. I think this is dangerous as if you still think there are good and bad guys then wars will never end. I wanted to portray a different situation where Tamura doesn’t understand who the enemy is, where the attack is coming from and why it’s coming. It’s unclear who is giving him orders. He doesn’t even know who the leaders are anymore. He’s just there on his own trying to make sense of a hard situation.

Sound seems to be very important in your work. It’s almost possible to see images through the sounds you use. What is your intention behind the way you use sound?

With this movie, more than telling the story, I wanted my audience to experience what a war is and what being involved in a war really means. I think sounds are a key component of this. My intention was also for the audience to understand not only what is going on in this jungle but also what Tamura thinks is going on. Sound has a huge role to play in achieving this.

You often act in your own films but you are not normally the lead role. Why did you decide to take this role in Fires on the Plain?

I have acted in many of my films before but in this case I really would have preferred to choose another actor for the main character. Unfortunately, it was not economically possible. The budget was extremely small so hiring another actor would have been too expensive. That’s the reason I ended up playing Tamura.

Flickfeast would like to thank Shinya for taking the time to speak about his film. Fires on the Plain premiered at Venice on 2nd September. Our review can be found here.