I recently approached Robin Yacoubian, the editor here at Flickfeast with the idea of a weekly column – my thoughts and general musings on cinema and experiences as a critic.  To my delight he agreed further enthusing that we should start as soon as possible.  So this column was born.

I should start by saying a bit about myself and what, if anything, qualifies me to expound my opinions on film each week through various websites (including Flickfeast) and why should anyone want to read them?  The first part is probably easier to answer.

I can’t determine precisely which came first, my love of writing or obsession with cinema and fascination with horror films in particular.  My first experience with horror came when I was at secondary school during the early 1980s.  It was the glory days of the video nasty and, though we didn’t have a video recorder, many of my school friends did.  Each Monday they would regale me with the gory highlights of what they seen at the weekend, and titles like The Burning, Bloody Moon and Friday 13th were burnt into my memory though unfortunately (or fortunately as my mother would have seen it) the accompanying images were not.  My only other contact with horror during this period was reading the back of the video boxes at the local rental shop, as well as watching Hammer House of Horror on a Saturday night (which strangely, considering my parents disquiet at my fascination with horror films, they let me see).

It was not until some years later, after I had left the reserved environs of Northern Ireland, and studied journalism in London, that I got a job with the now deceased company Visual Imagination, publishers of Film Review, Starburst and the jewel – in my opinion – of their crown, Shivers.  I’m forever in debt to that magazine’s editor David Miller, who gave me my first chance to contribute features (a piece on the films of Dr Jekyll and Mr Hyde) and reviews to a magazine.  Things changed and I, as time, moved on, working in everything from men’s clothing retail (which didn’t really work – I love wearing fashion but not selling it) to running my own antiquarian bookshop (which again proved that I prefer the product to actually selling it).

Where am I now?  Well, my full-time job is still in retail – I work for a well-known bookshop in central London.  But if asked I refer to myself as a writer.  I once read it doesn’t matter what you do to make the money to live on, if you consider yourself first and foremost a writer then call yourself that – anything else is subsidiary.  So, I’m a writer, critic and commentator.  As for what qualifies me to do this?  Well, this is where I believe I should be honest – the fact is, no more really than the next person.  I have a modicum of talent (I’ve been told by others that I have a reasonably appealing way of writing – neither high brow, nor I hope, tabloid fodder) and a passion for film (love for your subject is essential no matter what subject you’re writing on).  After that it’s true what they say – to succeed you need to be a plodder – keep writing and eventually things will happen, as they have for me to a degree.  Since I started writing on film seriously three years ago I went from no outlets to my position now where I contribute to at least eight various websites and magazines on a regular basis.  I have also written pieces for a major book on film which was released last year, and contributed the sleeve notes to the upcoming new Blu-ray rerelease of the classic Vincent Price horror Theatre of Blood (which incidentally I rate as my favourite film ever).

And that’s it really.  I have a very good friend whose opinion I highly regard (as a published author I believe she has some claim to be able to comment on the subject), who believes I will succeed as a writer.  Whether I will or not remains to be seen.  However, for the moment at least, I’m doing something I enjoy (which is after-all the main thing).  I hope that others out there find something of interest in what I have to say. 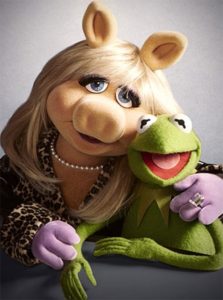 The highlight of my week had to be attending the London press conference for the release of the new Muppet film Muppets Most Wanted.  The film itself may not be up to the standard of their previous outings – unfortunately the glory days of the Muppet television series are long gone.  However being in the presence of Kermit and Miss Piggy was a delight – not to say surreal experience – which I will remember for years to come.

What it’s really like to attend a press screening.