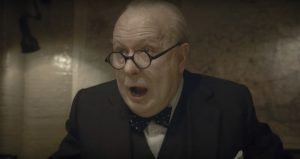 A fat, old man goes to war after riding on the tube, because he wanted to see poor people. It’s set in olden times, when we didn’t have phones, so instead he shouts everything, so that the bad guys can hear him, even though they live somewhere that isn’t here.

Some other people don’t like him, and some bombs go off in places I’ve never been, but eventually the old man wins war, because his wife was cool with him being fat and old and his shouting got really scary, which probably scared the bad guys away, back to where they came from, which I think was Belgium.

NEWSFLASH! Getting in the mood – Horror Channel heralds FrightFest 2017