This week, my tv showed me this…. 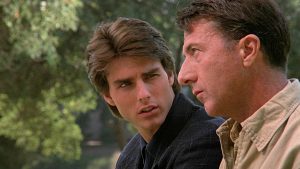 This film is about a ‘special’ person who goes on a road trip across America, because Quantus was going to Australia. He’s weird, talks funny and gets in numerous awkward situations. He also has shouty fits and body spasms when he gets upset.

He’s accompanied by Dustin Hoffman as his autistic brother.

Win tickets to the premiere of The Last Seven