Jean Luc Godard once said “Film is truth, 24 frames per second.” Now, I don’t know what that means, but I do know it’s wrong. Eternal Sunshine of the Spotless Mind cannot be truth, because it’s made of film, and truth is made of emotions or something. I also don’t know who Jean Luc Godard is, or what 24 frames have to do with it, as frames are usually found in Asda, for pictures and photos to sit in.

This week, it was on tv and I thought the title was long….

Eternal Sunshine of the Spotless Mind 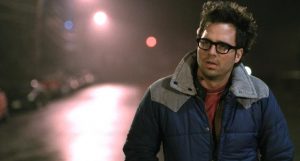 Jim Carrey goes to the doctor to have his brain killed because he doesn’t like Kate Winslet, except he does. He goes to sleep and the doctor’s assistant, who is the Hulk, puts a sieve on his head before having sex with that girl from ‘Melancholia’. Meanwhile Kate Winslet shows Jim why he actually still likes her, by dyeing her hair and painting potatoes, before they both go to the beach and Jim’s brain finishes being killed. He wakes up and he and Kate go off and like each other again, which means he wasted his money.

Win Buck Rogers In The 25th Century on Blu-Ray