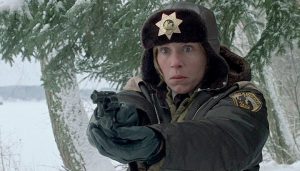 Fargo is about people who live in snow and like to die.

There’s some guy who sells cars but can’t make money. His wife gets kidnapped and then a really fat woman tries to find her but can’t because of the snow and because she’s fat.

It all gets very messy and blood gets everywhere because thats what blood does when it’s not in your body anymore.

The accents are funny though.