The sorting hat gave up on him.

Jean Luc Godard once said “Film is truth, 24 frames per second.” Now, I don’t know what that means, but I do know it’s wrong. Harry Potter and the Philosopher’s Stone cannot be truth, because it’s made of film, and truth is made of emotions or something. I also don’t know who Jean Luc Godard is, or what 24 frames have to do with it, as frames are usually found in Asda, for pictures and photos to sit in.

This week, I tried to read the book, but did it wrong, so I watched the film instead.

Harry Potter and the Philosopher’s Stone 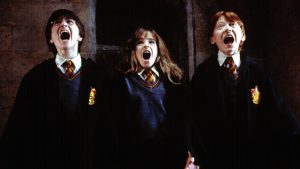 A baby who’s a demon or something, is put into foster care with some bastards because his parents decided to be killed. Then he grows up and gets kidnapped by Cracker, and sent to a really posh private school for possessed kids. Once there he gets grief from an albino, is given a ginger room mate and gets an unhealthy amount of attention from the headmaster. Health and Safety appears to be dodgy too and the food hall doesn’t have a roof.

There’s some chutney about a magical rock, but mostly I was freaked out by Emma Watson looking so young, because I only knew her from that Disney movie where she falls in love with a lion, or whatever.