Stanley Kubrick was a man with a beard, who made films like Full Metal Jacket, just like that other man with the beard who makes films as well, except Kubrick didn’t make as many films as the other one, and definitely didn’t make E.T. 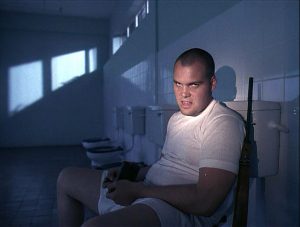 A war bastard shouts at some men until they become soldiers, which works on everyone except the fat guy, because he’s fat. He shoots the war bastard, then shoots himself in the head part of his body, and then the film goes somewhere foreign, where there is a war happening, like in Belgium or somewhere. Some of the soldiers get shot by a girl, which I thought was funny. Then they shot the girl.

Everything’s on fire at the end.