Stanley Kubrick was a man with a beard, who made films like The Shining, just like that other man with the beard who makes films as well, except Kubrick didn’t make as many films as the other one, and definitely didn’t make E.T. 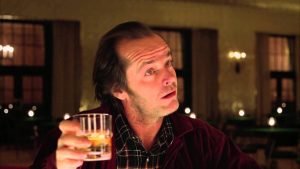 A family goes to live in a hotel by accident, because the dad, played by Jack Nicklaus, is mental. He tries to write a book, but he’s a bit shit at that and doesn’t use a computer, because the hotel is in the middle of nowhere and probably has rubbish broadband. Anyway, there’s a bit where the lifts are broken, another bit with a naked woman and then the dad goes tits and tries to kill everyone, which he doesn’t, but does manage to kill himself, so it’s swings and roundabouts, isn’t it?

There’s a bit with some twins that shit me right up, though.