Jean Luc Godard once said “Film is truth, 24 frames per second.” Now, I don’t know what that means, but I do know it’s wrong. Labyrinth cannot be truth, because it’s made of film, and truth is made of emotions or something. I also don’t know who Jean Luc Godard is, or what 24 frames have to do with it, as frames are usually found in Asda, for pictures and photos to sit in.

This week, I found this DVD under the couch… 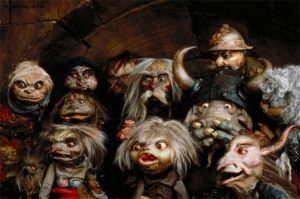 A baby is kidnapped by a potential nonce with big hair and taken to a castle surrounded by Muppets who look like they were designed on acid.

The baby’s sister, played by that girl who played Gladiator’s wife in that schizophrenic movie, goes on a journey to get him back, accompanied by a melted Hobbit, a large wig and a dog riding another dog.

Iggy Stardust plays the nonce, you can see his penis through his tights, the music rocks, there’s a lake made of sewage or something and the red dancing Muppets shit me right up.

There’s a maze, like in Inception, but the film is not Inception.

The cockney worm was good though.