Jean Luc Godard once said “Film is truth, 24 frames per second.” Now, I don’t know what that means, but I do know it’s wrong. Ladybird cannot be truth, because it’s made of film, and truth is made of emotions or something. I also don’t know who Jean Luc Godard is, or what 24 frames have to do with it, as frames are usually found in Asda, for pictures and photos to sit in.

This week, I wanted to watch a nature documentary, but got confused. 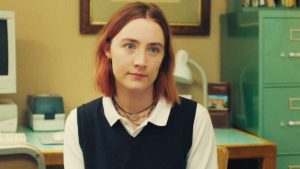 A spoilt girl, who has unrealistically good taste in music, literature and pop culture for her to really be convincing as a teenager, has sex with two different guys, which turns one gay, and then she gets a bit EMO and falls out with her friend, who is way nicer than she is.

She fights with her mum all the time, even though she has pretty much everything that she wants and then goes off to college, but has the nerve to act as though she’s really going to miss everyone, even though she clearly hates them.

This film was not made for me.