Jean Luc Godard once said “Film is truth, 24 frames per second.” Now, I don’t know what that means, but I do know it’s wrong. Mission:Impossible-Fallout cannot be truth, because it’s made of film, and truth is made of emotions or something. I also don’t know who Jean Luc Godard is, or what 24 frames have to do with it, as frames are usually found in Asda, for pictures and photos to sit in.

This week, I believed the impossible. 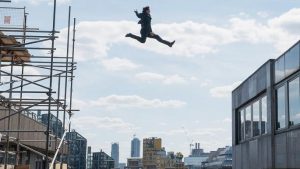 Tom Cruise plays Ethan Hunt (which sounds like cockney for a real bastard), who is a secret agent like James Bond, but not James Bond, because James Bond isn’t a Scientologist.

This movie is AWESOME!!!