Jean Luc Godard once said “Film is truth, 24 frames per second.” Now, I don’t know what that means, but I do know it’s wrong. Nosferatu cannot be truth, because it’s made of film, and truth is made of emotions or something. I also don’t know who Jean Luc Godard is, or what 24 frames have to do with it, as frames are usually found in Asda, for pictures and photos to sit in.

This week, lots of scary things were on tv for pumpkin day and I watched the wrong one. 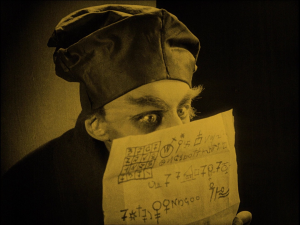 A prick goes to live in a castle because his boss tells him to. When he gets there, he meets an old dude with long hands and an ugly face that looks like twelve slapped arses. So, the old dude gets in a box full of dirt and gets on a boat, leaving the prick behind. The old dude must have the horn or something, because as soon as he gets off the boat, he creeps into a girls room and tries to make out with her, but she isn’t down with that and uses the sun as a rape alarm. Which works, because it makes the old dude die, leaving the girl free to marry the prick when he gets back from wherever it is he went to. I think it was Norway or something.

Also, the film was broken, because it didn’t have any colour and every time someone spoke, the noises came out like letters.