This week, my girlfriend said she wanted to see the new Spielberg. Well, I say girlfriend. I mean my mum. 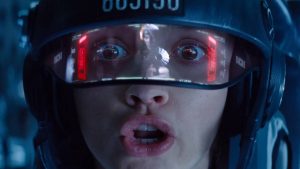 A computer boy lives in a van on top of another van, in the future. He still has broadband though, even though it’s a shit hole, which must be really good, because when he plays his computer games, it actually takes him inside the game, so it must be fiber optic.

Anyway, there’s a dick in a suit who wants to rule the internet, I think, but computer boy says NO! and then things go all Warcraft, except with way better effects.

King Kong’s in it. So’s the dead girl from Me, Earl and the Dying Girl, except she isn’t dead, which makes her a liar.