This week, the internet. A lot of people are into it these days, so I watched… 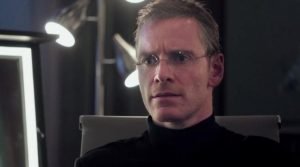 Steve Jobs is about a man named Steve Jobs, and not about a bunch of jobs that are being left for a guy named Steve. Anyway, Steve is a computer bastard that nobody likes, except for this one woman who’s foreign.

He makes an ipad, or something, but gets sacked because he’s an arse.

Then he gets computer revenge by making a really, really, really good commodore 64, that’s even better than the last one he made, but people still think he’s a dick, except his daughter, that he doesn’t like, who learns to love him because he kept one of her shit drawings.