He is not an animal. Animals are smarter.

Jean Luc Godard once said “Film is truth, 24 frames per second.” Now, I don’t know what that means, but I do know it’s wrong. The Elephant Man cannot be truth, because it’s made of film, and truth is made of emotions or something. I also don’t know who Jean Luc Godard is, or what 24 frames have to do with it, as frames are usually found in Asda, for pictures and photos to sit in.

This week, I’d seen The Jungle Book and thought this was the sequel. But it wasn’t. 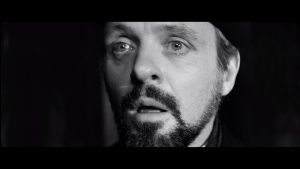 A man who is made out of elephants goes to live with a doctor who has a beard, because his face has gone wrong.

The film was broken when I watched it, because there were no colours, unless those are the colours, because the film was made ages ago, and things were black and white back then, like in really boring documentaries.

Anyway, the man made of elephants becomes friends with some people who don’t mind that he looks like a buggered bollock and then he dies because his bed is too hard or something.

I think his dad was a nonce or something, too.