He has less brain cells than a piano has black keys.

Jean Luc Godard once said “Film is truth, 24 frames per second.” Now, I don’t know what that means, but I do know it’s wrong. The Piano cannot be truth, because it’s made of film, and truth is made of emotions or something. I also don’t know who Jean Luc Godard is, or what 24 frames have to do with it, as frames are usually found in Asda, for pictures and photos to sit in.

This week, I classed this shit up… 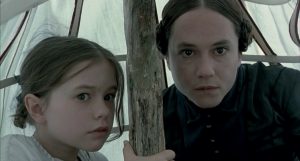 The Piano is about a piano that lives with a woman who doesn’t talk because she’s thick, but she gives it away to the dude from those car insurance adverts, because he has a penis, which he goes around showing her, a lot. But it’s not creepy because he loves her. Then the dude from Jurassic Park appears and he’s all like “whoah, err, yeah, what,” and then he axes her middle finger off, I think, so that she can’t flip him the bird, which she was totally doing by sleeping with the car insurance guy.

It looks weird because it isn’t set here.

Trailer Park: Chance the Rapper is a Pizza Delivery Werewolf in Slice