Jean Luc Godard once said “Film is truth, 24 frames per second.” Now, I don’t know what that means, but I do know it’s wrong. The Post cannot be truth, because it’s made of film, and truth is made of emotions or something. I also don’t know who Jean Luc Godard is, or what 24 frames have to do with it, as frames are usually found in Asda, for pictures and photos to sit in.

This week, I tried to read the book, but did it wrong, so I watched the film instead. 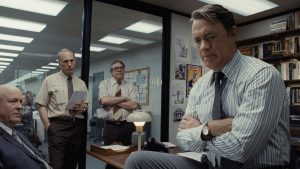 That woman that’s in everything owns a newspaper, and it’s run by Forrest Gump, except he has become really clever, and old, and started wearing shirts that don’t make him look a bit brain wrong.

Anyway, some guy comes back from war, with some pieces of paper that say war is a bit shit, and decides to give it to the newspaper, because newspapers are made of paper as well.

Then Forrest and that lady talk for about six hours, until they decide to let the words appear in their paper, even if it means they get arrested, which is stupid, because a newspaper can’t get arrested, because it’s a newspaper.

It’s a true story, which makes it amazing, because how these people didn’t know they were being filmed that whole time is blowing my mind.

There aren’t any postmen in it, though, which makes the title a liar.