He honours the fallen, by default.

Jean Luc Godard once said “Film is truth, 24 frames per second.” Now, I don’t know what that means, but I do know it’s wrong. They Shall Not Grow Old cannot be truth, because it’s made of film, and truth is made of emotions or something. I also don’t know who Jean Luc Godard is, or what 24 frames have to do with it, as frames are usually found in Asda, for pictures and photos to sit in.

This week, war was everywhere.

They Shall Not Grow Old 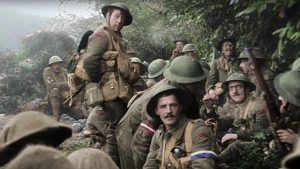 This is a film about old people, except they don’t look old, they look young. They also change colour, which is brilliant, because it means they aren’t racist, even though they go on big boats, to another country, to kill real racists, because war is wrong and people are bastards.
Especially racists.
Anyway, they walk about a lot, then go to live in these big holes, but not cute ones like in the Hobbit movie, but like really, really horrible ones, like the kind you get in wars, which is exactly what this turns out to be, which is a twist that, frankly, I didn’t see coming.
Some of them eat out of tins. Probably because they are poor.
Either way, they were all braver than me, because I’ve never been to a war, unless you count that time we played British Bulldog in the playgrounds at school and shit got out of hand, because I punched Jesse Parsons in the nose and he thought I did it on purpose, but I didn’t, because, y’know, Jesse’s a mate, and he lent me his copy of Grand Theft Auto back in 2000, which I never gave him back.
Anyway,
Marks out of 10…
10.