This week, frozen rain fell from the sky and stopped my door working, so I stayed in and watched… 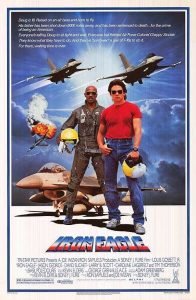 Tom Cruise uses his hands and body to fly a plane really high up in the air. There’s a song by Kenny Loggins, which is quite 80’s. Kenny Loggins also did some music for “Caddyshack” which is pretty good, isn’t it? Anyway, all these planes have a war and Tom Cruise wins by being clever or something.