Flim Weakly Review – Under The Skin

One of the boldest films of the decade. One of the dumbest minds of today.

Jean Luc Godard once said “Film is truth, 24 frames per second.” Now, I don’t know what that means, but I do know it’s wrong. Under The Skin cannot be truth, because it’s made of film, and truth is made of emotions or something. I also don’t know who Jean Luc Godard is, or what 24 frames have to do with it, as frames are usually found in Asda, for pictures and photos to sit in. 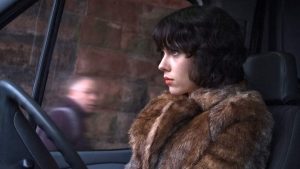 The girl avenger from ‘The Avengers’ is an alien who comes to Earth to have sex with Scotland. She drives around in what looks like the sort of van your simple cousin might drive. She dresses like a hooker, which is perfect for picking up stupid men. She lives in a shed full of oil or something and is black underneath her skin which I think means she’s not racist, but can’t be sure because I stopped paying attention after she put her clothes back on.