His brain is caught in a snare it can't escape.

Jean Luc Godard once said “Film is truth, 24 frames per second.” Now, I don’t know what that means, but I do know it’s wrong. Watership Down cannot be truth, because it’s made of film, and truth is made of emotions or something. I also don’t know who Jean Luc Godard is, or what 24 frames have to do with it, as frames are usually found in Asda, for pictures and photos to sit in.

This week, I took a day off and watched a cartoon that wasn’t meant for me. 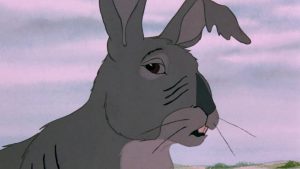 Watership Down sounds like a war movie, except it isn’t because wars were not fought with rabbits.

In fact, it’s about some rabbits who have ended up in a cartoon, but not a funny one like Aladdin, but the kind of cartoon that you only watch in nightmares, because that’s the only place where a cartoon like this could exist.

Except this one does exist, in real life, and in it, some rabbits move home because the council is building some flats or something, and they need their field, so they dump some blood in there to make the rabbits move, which they do. But then they go on this weird journey to find a new home, and a whole bunch of them die, really horribly. With blood and stuff.

There’s a ghost rabbit in it too, which appears when you sing Bridge Over Troubled Water, and then there’s a bit where a dog mauls a warren-full and a seagull says “Piss off”, which was really funny and made me laugh, until the rabbits started dying again, which they did. A lot.

Natalie Portman Musical Vox Lux To Be Released By Neon