Anna was born for martyrdom. She was born to suffer. She is a secular Sister of Infinite Compassion living in the shadow of the depravity of the human heart. In another epoch, she would have died young caring for lepers and outcasts in a quarantined colony of the damned. Like St. Brigid of Ireland, she would have considered her beauty a distraction from the purity of her mission – and prayed for ugliness. One night, they would have come for her, the wickedest of the unclean under her care. After satisfying their perverse desires, they’d open the window to slip away just before sunrise, leaving her for dead. The silence would be torn by a blood-chilling whisper, “I forgive you. I will pray for your souls.” Knowing they had murdered a saint, they’d seek redemption by going about creating a legend of her life and good works. Over time, miracles would happen in her name. As years pass, the faithful would petition the Holy Father for her elevation from beatification to sainthood. She would be Anna, the patron saint of those who suffer. In the hands of French Director, Pascal Laugier, a torch bearer of the French Extremity Movement, her life followed essentially the same path, just more abruptly, under the Papal radar, and with a fuller measure of mayhem and brutal violence.

Oh, we haven’t mentioned Lucie. Lucie is Anna’s leper, figuratively speaking. The two girls have spent about fifteen years in a mental institution. Lucie has always been just beyond reach, at least to the trained personnel. Her story has been written about in the newspapers. How she was found wandering the streets, a young girl, obviously the victim of terrible abuse. She isn’t a mystery; she’s broken. She’s beyond them. But Anna’s love for her is a balm to her wounds and spirit. They are friends. Eventually they are released. Some time has passed and we visit a typical suburban French family. The four of them – mother, father, sister and brother – are sitting at the kitchen table having breakfast amid the chatter and banter and sibling teasing that is no doubt being repeated throughout the neighborhood. It’s a normal family. You can feel the love. There is a knock on the door and father rises from the table to answer. It is Anna. The leper. The outcast. There is barely enough time to sense the ominous vibe before she pulls out a double-barrel shotgun and – KABOOM! She squeezes one off and blows daddy across the room like he was hit by a freight train. Paralyzed with terror, the family is frozen like three mannequins in a wax museum exhibit. Only their eyes are screaming. Anna walks briskly over to the kitchen table and—KABOOM! This blast takes out the mother, leaving a horrid blood and tissue splatter pattern on the wall. As the two kids scramble for dear life, Anna reloads. In a little alcove adjoining the kitchen, she blasts a gaping hole in the boy’s chest. The daughter is just where you’d expect a young girl to hide – under the bed. Anna climbs up on the bed and fires down into the mattress. Feathers fly. The bloodied girl rolls out from under the bed and runs wildly for the hallway. Anna quickly reloads and blows a hole in the wall next to the door. These new houses just aren’t made the way they used to be. The wall offer little cover. The girl falls dead. The house is a scene of bloody carnage.

You think that’s harrowing. Welcome to French Extremity. This is just prelude to the real weirdness to come. There’s someone else in the house. No, there’s some thing else in the house. At first you just catch sight of it scampering by at the end of the hallway. Then it’s right there. It’s a wild, wasted, demonic woman-thing. Its dry, leathery skin is covered with the scars. It’s scrawny, ugly and fierce. Anna knows this creature; she tries to appeal to it. “I killed them all. Even the children.” She is scared to death of it. Was the slaughter of the family some kind of blood sacrifice to the demon? If so, its appetite is not appeased. The demon is upon her, slicing her flesh with a blade, blood running down her back and her arms. She pushes it away and runs.

She calls Anna on the house phone, telling her where she is and what has happened. She is distraught, in a state of hysteria. The demon thing is back. Lucie continues to plead with it in vain. “I killed them. I killed them all!” Again she is slashed, and again. She runs in terror from the house, falling at Anna’s feet. Anna helps her into the house and tends to her wounds, horrified at the scene of savagery and death. As Anna cleans her wounds, there are flashbacks of Lucie as a child chained to a chair. The chair is bolted to a concrete floor. It is the chair in the picture in the newspaper, a hole in it so the prisoner can relieve herself without being unchained. Lucie is fed gruel, the spoon roughly shoved into her mouth. When she resists, she is beaten. There is a sense that this abuse is her way of life. She is tormented, slapped, abused. Finally, her keeper is careless and Lucie frees herself and runs. The place looks like an abandoned slaughter house. There’s a door at the end of the hallway. She runs through it.

She’s free. There is no exhilaration in her freedom. She is broken. 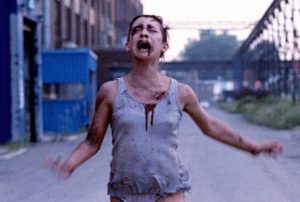 Back in the present, she is lying on the sofa with Anna sitting there next to her. She looks up at Anna, “I found them.”
Anna replied, incredulous “How could you know it was them? After all these years -”
Lucie interrupts, “She’s here, too.” She hurt me again. She’s talking about the demon-thing.

There is infinite pity in Anna’s eyes. Lucie has suffered so, and it has driven her mad. Anna wants to believe her friend but… the demon must be in her mind and the wounds self-inflicted. It can’t be real, can it? And this poor family…

In one scene, Anna discovers that the mother has survived. She tries to drag her to safety but Lucie hears her moans. She attends to the unfinished business with a small sledge hammer, beating the mother head to a pulp. Lucie screams at Anna, “You don’t believe me! Don’t you care how they hurt me?”

Later, Anna will discover a passage way that leads to a facility under the house, concrete rooms and hallways, an operating room of some sort. It isn’t the same place as in the newspaper photos. It’s modernised. One thing is the same – the chair with a hole in it. There are new tools to achieve the same purpose. But what is the purpose?

Poor St. Anna lingers, every discovery confirms Lucie’s story. Her friend spoke the truth and this fills her with joy and guilt. But she has stayed too long. Others arrive. 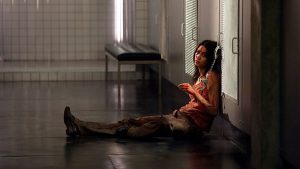 Anna is now the prisoner. In a real sense, this is where the story begins.

Dear Anna, have you ever wanted a glimpse of the hereafter? Life after death. Heaven. Hell. There are those who have suffered beyond endurance, but have endured. Have you seen their upraised eyes? The moment of transcendence, of martyrdom.

Morjana Alaoui is superb as Anna. Her eyes… Mylene Jampanoi is absolutely convincing as the broken, mad soul, Lucie. But this is Pascal Laugier’s movie. He was pulled from the production of the re-make of Hell Raiser because of creative differences with the studio. He wanted to explore sadomasochism in a little more depth than management thought advisable. Understandable from a commercial point of view. But I wish they had given him a chance. This demented soul has a classic in him and Hell Raiser might have been it.

If you can endure this little visit to Laugier’s  world, maybe French Extremity is just what the mad doctor ordered.