Oct 26th 1985 is, going by the Back To The Future movies, the date of the first time-travel journey by a dog named Einstein in a remote control DeLorean but this article is timed to appear before your eyes today, in a flash of flame and noise, because November 5th is the date that Marty McFly travels back to in the first movie. The Back To The Future series is more than just a great trilogy. It’s a movie, and a bunch of characters brilliantly portrayed by great stars, that has been embraced and subsequently owned by the fans. The franchise has grown with computer games, car models, an animated TV show (but let’s not mention that . . . . . . . . . . mainly because I haven’t actually seen it) and every fan was bowled over with excitement when this advert appeared courtesy of Nike. So let’s not delay things any further. It’s time to hit 88 mph and take a trip . . . . . . . . . 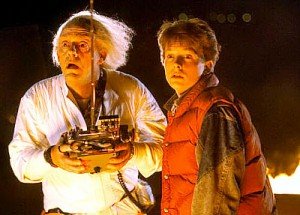 When people say that they don’t make ’em like they used to any more they often point further back to the movie classics of the 70s, back to the 60s and beyond. The irony is that Back To The Future, a movie made in the 80s with a protagonist who ends up visiting the 1950s, is just as great an example of the kind of film you can’t imagine being made nowadays. It’s a modern classic, it’s lightning in a bottle, it’s 1.21 gigawatts of sheer entertainment that influenced and entertained an entire generation (and future generations).

Most people know the storyline but here’s a quick recap to remind everyone of just why Back To The Future is so unique and wouldn’t be made today. Marty McFly (Michael J. Fox in his star-making movie role) is a teenager who always seems to be running late with life never quite going as he wants it to. His parents seem unhappy, his father has no backbone and his best friend is an eccentric scientist (Emmett ‘Doc’ Brown, played by Christopher Lloyd). The doc may be eccentric but he’s also brilliant and has managed to make a time machine out of a DeLorean. After showing Marty the machine in action events quickly get out of control and Marty finds himself using the machine to escape trouble. Unfortunately, he escapes by travelling from 1985 all the way back to 1955. Worst of all, he gets himself in the wrong place at the wrong time and intervenes in an incident that was supposed to result in the meeting of his parents (Crispin Glover and Lea Thompson). Before he and his siblings fade from existence, Marty has to get his parents back together and make sure love blossoms while also dealing with bullying Biff Tannen (Thomas F. Wilson) and convincing the 1955 Doc to help him find a power source that will enable him to get back to the future.

Back To The Future is one of those movies that it’s a bit pointless to keep talking about. Fans already know how great it is and newcomers should just stop reading any reviews and make sure that they see the thing. It’s perfect cinema entertainment. The cast are all just perfect in each role (thanks to some recasting after Eric Stoltz gave quite a different interpretation of Marty McFly and was replaced by Michael J. Fox), the direction is spot on and the script is an abject lesson in superb writing. The movie runs for just under two hours but never flags or feels overlong. Take most of the lines out of the script and they fail to make much of an impression but put them together in the right context, complete with the wonderful characters delivering the dialogue, and repeat viewings show just how sharp almost every single line is.

Taking some complex, and even disturbing, ideas and making them palatable for fun-loving audiences, it’s often amazing that Back To The Future was made in the first place, let alone crafted into a modern classic. Audiences are given a quick sketch of the basics of time-travel and how disastrous a paradox can be. They’re then made to laugh along with scenes that feature a peeping tom, scenes that feature a reversal of the classic Oedipus tale and even a bit of attempted date-rape. Put like that, it’s mind-boggling to think of how this was all wrapped up and sold to audiences as lighthearted family entertainment. It’s just as mind-boggling to watch the movie and realise that it also just WORKS as lighthearted family entertainment. Layered, intelligent, hilarious, intricately constructed with love and care, Back To The Future remains, arguably, the best thing to ever come from Robert Zemeckis and Bob Gale and deserves every bit of praise ever heaped upon it. 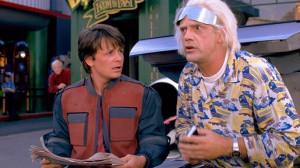 The second part of the great time-travel adventure comedy trilogy, Back To The Future Part II is the weakest of the three (though some people view it as the best) but certainly keeps a high standard and still a hell of a lot of fun from beginning to end.

The plot sees Doc (Christopher Lloyd) taking Marty (Michael J. Fox) and Jennifer (Elisabeth Shue) 20 years into the future to help stop their children having some major problems. Things take a turn for the worse when Marty buys a sports almanac that he thinks he can take back with him to the past and profit from. Old Biff Tannen (Thomas F. Wilson) slowly puts the pieces together and sneaks back in time with both the DeLorean and the almanac to set his younger self up with a life that will include a lot of “luck”, vast wealth and a better relationship with Marty’s mother (Lea Thompson). All of this makes for a lot of chaos in all three time periods as Marty has to help his future son out in 2015, finds a much-changed environment in 1985 and then has to return to 1955 to repair the damage done, avoiding any more changes including the other version of his 1985 self who is still busy going through the events depicted in the first movie.

Confused yet? No surprise if you are, Back To The Future Part II spins a large number of plates and does so with a lot of panache. It may not have the constant comedy gold of the first movie or the enjoyable genre-skewing of the third instalment but this movie manages to make a complex, intelligent adventure into something family-friendly that allows you to sit back and enjoy everything while your brain vigorously works out what’s going on and catches up with you by the time the end credits roll (hopefully).

Most of the main cast members return (with the most notable exception being Crispin Glover, who famously overvalued his standing although I admit that I would have loved to see him stay with the series) and everyone is fantastic, often playing multiple roles in the different time periods.

Bob Gale’s screenplay, and the direction from Robert Zemeckis, is great in the way it keeps things so well paced while maintaining a focus on the problems caused by the time travel. Watched on it’s own it’s a decent enough little film but viewed as part of the trilogy it’s a brilliantly constructed mix of thrills, in-jokes, foreshadowing, callbacks and impressive effects (both practical and other).

As I’ve said before, this trilogy just wouldn’t be made today. If the first movie was twisted and warped and brilliantly covered by that sheen of pure entertainment the second instalment is a much darker journey and also a cheeky bridge to the third, and final, part. 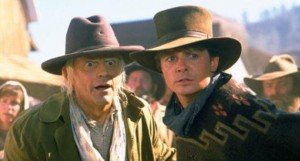 The third and final part in the Back To The Future trilogy is both a delight for fans of the franchise and a treat for Western lovers, with Marty (Michael J. Fox) heading back to 1885 in an attempt to stop his friend, Doc Brown (Christopher Lloyd), being shot in the back over a matter of $80 by “Mad Dog” Tannen (Thomas F. Wilson).

Robert Zemeckis once again directs, from a screenplay by Bob Gale based on the story and characters created by both of them, and brings a satisfying conclusion to one of the best movie trilogies of all time. Yes, cinema fans may point to the overall quality of The Godfather trilogy or The Lord Of The Rings and all of it’s grandeur but you’d be hard pushed to find any other three consecutive movies in any franchise that would prove to be as much fun as the Back To The Future movies.

The script is, yet again, sharp and smart, carrying the audience through numerous snippets of time-travel conversation while never making things too complicated or allowing things to grind to a halt in between the more fun and thrilling moments.

Everything is made more appealing thanks to the returning cast members, all playing characters that audiences have grown to like spending time with. Michael J. Fox is great as Marty McFly (this time giving himself the suitable name of Clint Eastwood while stuck in the Wild West), Christopher Lloyd is hilarious again as the Doc, Thomas F. Wilson is one of the best cinematic jerks ever and there’s even a love interest this time around for the creator of time travel, Clara Clayton played by Mary Steenburgen.

Improving on the slightly ragged second instalment, Back To The Future Part III works so well because it includes many staples of the Western genre (and a number of character actors who will be familiar to fans) but stays focused on the plight of our time-travelling heroes. We get the usual assortment of one-liners, slapstick moments and set ups and pay offs of gags from within the film and also within the arc of the entire trilogy. Superior entertainment.

With the wealth of extras and the quality of the movies, the Blu-ray Back To The Future set is a stellar package that will please any fan of the movie. Full of commentaries, trivia, footage from both then and now and simply everything you could possibly want to know. The deluxe tin set is a thing of beauty and the version I just had to buy. Extras include some fun little reproductions from the movie (the photo of Doc and Marty in front of the clock), artwork, an “OUTATIME” licence plate and, best of all, blueprints for the DeLorean. In a competitive field, it still stands tall as a superb option for those looking out for Christmas gifts.