by Troy Balmayer
in Spotlight

Season 1 of ‘Game of Thrones’ is out now on 4K UHD Blu-ray and to celebrate this glossy upgrade, Picture-House Cinemas in London threw a Thrones inspired viewing party.

I swore my oath and ventured North of the Wall and into the breach. It wasn’t long before myself and many others were greeted by a couple of White Walkers; though they were more than happy to pose for a picture! There was definitely a level of anticipation thick in the air. Most of this probably boiled down to the fact you could get a snapshot sitting on the Iron Throne, which fans ahead of and behind me were eagerly looking forward to doing.

Hearing the opening score on an impressive speaker system gave me goosebumps and before the episode started I spoke to music producer Jay Pryor, who’s previously worked with Steve Aoki, about GOT and Lord of the Rings; “the similarity of epic scale is great. It’s a score that’s instantly recognisable.” The showing of the very first episode itself was just fantastic, former Bake Off and all round funny woman Sue Perkins was on hand to crack jokes and comment on the 4K treatment.

I was blown away by it, the detail is so crisp and clear that you could see a thinly spun spiders web across some trees in the opening sequence

I was blown away by it, the detail is so crisp and clear that you could see a thinly spun spiders web across some trees in the opening sequence. Everything from the big moments to the minute facial expressions between characters was beautifully enhanced. The atmosphere throughout was brilliant, clearly some people hadn’t ever watched the show and gasped the roof off, when Bran was shoved from the window; cementing my thought that this is the top moment from the series. 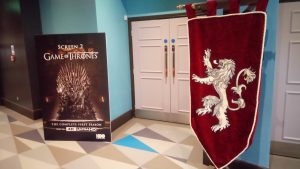 After the credits rolled, we entered the bar which was decked out with vines, dragon eggs and canapes being handed out which made me feel like I was stepping into Pentos hosted by a Dothraki wedding planner. The vibe was strong and music was pumping, thanks to DJ Reggie Yates. I managed to grab a quick chat with the TV presenter:

Troy Balmayer: I take it you’re a fan of the show?

TB: Who is your favourite character if you can choose?

RY: It has to be the Mother of Dragons doesn’t it!? Or, her partner, the one with the eggs…

RY: Yes, him. He was great, I wish Jason Mamoa had been in it longer.

TB: Is it weird that I liked Littlefinger?

RY: That is strange!

TB: Because Season 1 is now out on 4K, I was wondering if you had a favourite moment from the first season?

TB: Or any season…

RY: The Red Wedding. That was one of the illest moments I’ve seen on TV. Or the guy getting his skull crushed, that was something…

RY: Yeah, that moment when the Mountain pushes his eyes in, oh no…the Mountain is my favourite character, has to be for that skull crushing! 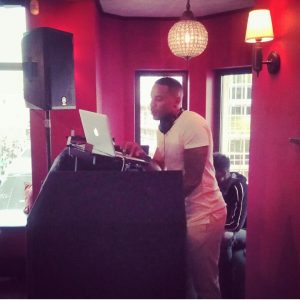 As the party spirit was still in full swing, I got talking to a couple of other people. Mo Ali is a film director and had worked with Michelle Fairley (star of Philomena) on 2014’s Montana and he and I were discussing the episode and he mentioned how “nostalgic it was, seeing characters we know of now”. Furthermore, “knowing their situation makes it weird seeing how small and different they appeared.” I also spoke to a guest called Alex, who loves the show because he “likes seeing the back story and how they’re all grown up now. He also commented that it’s nice to see a show that a lot of people have become a fan of.”

It’s not hard to see why, a show with many characters, glorious cities, treason and conspiracy has really become a part of people’s lives. The talk of nostalgia is apt, re-watching the families before winter arrived and the Walkers made a zombie dragon, is almost soothing. It made me realise why I grew to the show in the first place, it’s bold and rife with interesting character interactions.

The night was not dark and full of terrors. It was a perfect demonstration of how grand Game of Thrones is. The 4K UHD Blu-Ray release is one you shouldn’t miss and is available now.