by Troy Balmayer
in Spotlight

Long before Jon Snow’s heritage was revealed and in the good ol’ days before Hodor held the door, there was a time (2011), where the hugely ambitious fantasy drama ‘Game of Thrones‘ was just starting out. Now, of course pretty much everyone has heard of the show. Season 7 wrapped last year leaving fans impatiently waiting until 2019 for the last season to air.

Let’s not fret though, because that GoT void can be filled with the news that season 1 is being re-released but now on 4K Ultra High-Definition Blu-ray, on June 5th. This is definitely a TV series that is ripe for the Blu-ray picking, what with its sprawling fantastical lands of splendour and squalor. Be prepared to have King’s Landing in your front room, because with this amazing crystal clear update, it’ll be like you’re walking through the throne room!

As Season 1 is getting the boosted visual treatment, I thought it’d be apt to take a look back at some highlights but before that, I just want to comment on my love for the show. Although late to the party – I started watching in 2012 – I was swiftly swept away by the characters, world building and bold decisions for bloody, unexpected deaths. Before this show, anyone but the readers of George R.R Martin’s novels, would have thought someone saying the words ‘Daenerys Targaryen’ was a mumbling drunk, but now she’s someone people know as the ‘Stormborn’ character and easily associated her with the programme. Game of Thrones has become a worldwide phenomenon and it’s the blending of surprising gore with smart conspiracies that keeps the suspense up. It’s little wonder this HBO show exploded into the pop-cultural stratosphere.

So, let’s look back at the top ten moments from season 1. There will be spoilers…(is this really a show to warn of spoilers by now?)

It may not be a big, blood-drenched moment but a throne room scene between Varys and Petyr Baelish is one of those great examples where earlier scenes got whispered plotting down to a fine art. These two figures are extremely sneaky and their back and forth political play greatly demonstrates that the game of minds is essential in the game of thrones.

Grand Maester Pycelle spieling off observations about past kings and the newly appointed Joffrey could be a dull scene if not for Julian Glover’s expert doddery performance. We’re shifted seamlessly to seeing the old man shake off his decrepit hunch, stretch it out and move with ease. Sneaky!

The entitled, whingeing Viserys Targaryen gets what’s coming to him. After complaining about Khal Drogo not keeping to his promise, we see the Dothraki champion finally give the pathetic excuse of a dragon the crown that he kept desiring. It’s not a sparkly one to make Queen Elizabeth jealous though. Instead, he has molten hot liquid gold poured over his skull. 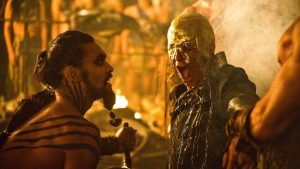 Daenerys truly is a queen in this moment, as she takes on the ritual of eating a whole horses heart. She finally completes this task and though it’s a grotesque thing to watch, it’s oddly beautiful as it furthers her story. Emilia Clarke (Solo: A Star Wars Story) brilliantly progresses as the fierce and adored Khaleesi we now know her to be.

The first ‘dance’ class between Arya Stark and teacher Syrio Forel is an example of excellent choreography. Accompanied by stirring music which makes the wooden sword exercise an exciting moment, we witness the rising talents of the young girl becoming a fighter and breaking free from the expectant role of marrying and bearing sons. 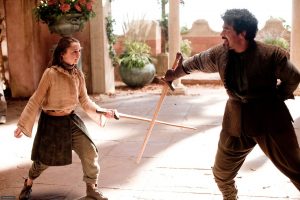 There’s still an ongoing melee of blood and swords continuing from the end of episode 7. Stark allies are being chopped down, which is nicely cut between Ayra and Syrio’s weapon practice and sliced together. It’s the little Stark’s first kill that stands out though, as you really feel the weight of her action and long before the kill list is a thought in her mind, this is where Arya truly learns to fend for herself.

It may not be a specific moment from within the first season, but the Emmy award winning title credits are so good and welcome newcomers to the environment with helpful geography in such a satisfying way. Still to this day I shall never skip the intro; I’ll happily watch each location unravel mechanically and hum the theme, awaiting the drama to unfold soon after.

A fantastic delivery by Peter Dinklage (Three Billboards Outside Ebbing, Missouri) of Tyrion’s first time with a girl sadly misses out because this episode features the sucker punch of Eddard Stark being beheaded, even after he proclaims a series of words he didn’t wish to utter. This moment shows the spiteful attitude of Joffrey and highlights the impact of his command because after Ned’s fate is sealed, the music cuts out and all there’s left to experience is the cries of Sansa, the deep breaths from Arya and the fluttering of birds wings. It illustrates the drama and sombre mood perfectly to shock the senses.

Another moment from the final episode has to be this close to the top spot because it showcases the rise of Daenerys as the Mother of Dragons. The morning after she entered a burning pyre, she’s alive and well and she also now has three tiny dragons with her. This is a spine-tingling sight, ending the first season in such an awesome manner that definitely packs the oomph to make you want to tune in for the second series. 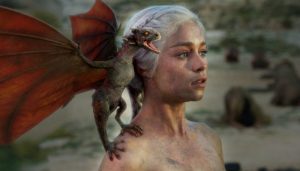 All the way back to the beginning now, for my very favourite moment from season 1. I admit it took a while to get into the locations and learn all the names, but by the end of episode one it really didn’t take long to grasp that this was a show where no-one is safe. This feeling stemmed from witnessing Bran Stark scale the walls of Winterfell and catch siblings Cersei and Jaime having sex – a bold moment in itself – but the anti is upped even further as we see Jaime push the boy out of the window and boom, the credits roll.

So, now you’ve read all about them, look forward to seeing all these glorious moments and more in explosive pixel detail on the ‘Game of Thrones’ 4K release. The Seven Kingdoms will be yours to own.

How would your Top Ten look? Let us know in the comments below.

The Role of the Luxembourg Film Fund