Barely a day goes by now without news of another US military drone strike. Sometimes its positive news, other times it’s tragic, but either way, the future of armed conflict appears to be here already. Arriving to compete for the Golden Lion at the 71st Venice International Film Festival, Good Kill, Andrew Niccol’s timely drama, addresses some of the issues raised by drone warfare.

In the first of two interviews (see here for our interview with co-stars January Jones and Zoë Kravitz), Flickfeast joined director and writer Andrew Niccol, and Ethan Hawke, who plays drone pilot Major Thomas Egan, as they discussed their preparations for the film, and the role of drones in military conflict.

How did you prepare for the film? Did you meet drone pilots?

Ethan Hawke: From the first moment I read the script and then talking to Andrew it was clear how meticulously prepared he was. He then did a great job preparing all of us and made it really easy. He brought two former drone pilots to set and they walked us around the units in which we were “flying”. They talked about how it all worked and their feelings about doing it and it was fascinating. I’ve also done other military movies and have military people in my family so it’s not an entirely foreign universe to me.

Did you ever think of joining the military yourself?

EH: When my step-brother and I went to see Top Gun, we both walked out of the movie theatre and he wanted to enlist and I wanted to be an actor. Our parents also used to give parties and we would go and give ourselves the job to assassinate someone with a little peashooter and we had to avoid being seen. But really, I’ve been called to the arts since I was a kid. Spending time with my step-brother I’ve had a sense of pride in him. He has the courage of his convictions in a way so many of us don’t. My brother’s put his life on the line for what he believes in many times and I have a certain envy. All of us wonder how we would respond to given situations, what kind of mettle we’re made of. That’s the kind of thinking that often leads young men to war. But I’ve never wanted to do anything but sit at this table with you.

Andrew Niccol: You know what’s really weird – I have cast you as an astronaut, an Interpol agent and fighter pilot and I don’t think you would last five minutes in any of those jobs.

What kind of envy do you mean? Envy of his masculinity?

EH: There’s a certain pride he can take in knowing that he’s willing to fight and die for what he believes in. I’m paraphrasing but there’s a great Martin Luther King line – “if you won’t die for what you believe in, what are you living for?“ He has that courage in his heart. It’s not about a macho testosterone thing. That makes it sound small. It’s about a belief in what you do. That’s why I’m proud of the movie. I want to at least spend my life trying to make things that are meaningful and substantive so I feel good to be here trying to do that.

There was a lot of hope that Obama would change the way the US approaches armed conflict when he took over. Are you satisfied with his decisions?

EH: One of the things which is most fascinating about now is how little it’s changed in the 20 years I’ve been watching US politics and how difficult it is for anybody who is well meaning to survive. I remember being a kid watching Jimmy Carter who even if you hate him he is so obviously a good person. He was well meaning and it showed how difficult it is to lead. You look at what Nelson Mandela achieved and the amazing leadership he showed, how rare it is but also how much it takes a whole community. I think Mandela would say he was the froth of a wave and part of the idea of a movie like this is to create a dialogue to create enough support and intelligence in politics around our decision making. But history will smile or frown on Obama in a way that I can’t foresee.

AN: You have to feel for Obama as well. He was President for three days and he ordered a drone strike on a house. They hit exactly the house they wanted to hit.  It just happened to be the wrong house.

Drones do offer benefits though. Is it not good to have something that could kill Hitler without carpet bombing all of Berlin?

AN: Absolutely, that’s why there’s no black and white with it. There’s ambiguity. There are good things about the drone programme and horrific things.

EH: Technology is presenting our whole time period with these interesting moral questions that our mothers and father weren’t asked. They are full of interesting ambiguity.

You’ve mentioned before that this film is about the schizophrenia of war. How do you understand that?

AN: It’s this warfare we’ve never had before. We’ve never had a time when you can go to work, fight the Taliban for 12 hours, go home, see the wife and kids and go to a soccer game. It’s never been like that.

EH: In regards to the Hitler question it brings up another one. Right now we’re the only kid on the block with the weapon but what if someone else has it and kills Obama without even leaving their home. It’s going to present a fascinating problem.

Do you know if there’s a US programme to protect against drone strikes?

AN: Here’s the thing about drones; they only work right now where the US controls the sky. It’s not like there’s an Afghani air force to shoot these things down or even very good surface to air missiles. It’s an asymmetrical war. But if you had an air force, these things are dodo birds and you could shoot them down so easily. You’d have to have more sophisticated drones. It would be another movie of course but there are now more sophisticated drones coming along that can take off and land on air craft carriers. 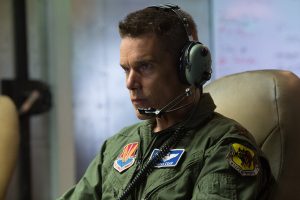 What are your thoughts on the debate in the US about honours for drone pilots?

AN: They wanted to issue a medal for drone pilots but every other pilot and branch of the military said this is not a good idea so they rescinded it. You normally give a medal for an act of courage, for valour. Sitting in this chair like this under no risk at all…

EH: Funnily enough though, what the movie proves is that he is at risk, he’s under immense physiological risk.

EH: Whenever you’re taking other people’s lives it takes a very strong mind set. Imagine having to continually see these things and then hover over it and count the bodies of those you meant to kill and those you accidentally killed. It’s a very difficult psychological thing to stay on point and still see this as serving the greater good. That’s very difficult to maintain. World War II pilots weren’t asked to do that.

The ending of the film comes across as almost uplifting. Why did you decide to go with this?

AN: If you listen carefully to the end of the movie when it pulls away there’s that same click like a drone is watching Ethan’s character. So yes he’s going to try and connect with his wife after he’s not connected with her the whole movie but it’s very ambiguous.

EH: He’s probably going to be arrested in a few days.

AN: Yes, he’s basically committed murder so there are consequences.

EH: For me the movie is so thorny. There’s a lot of ways that Major Tom Egan is losing his balance and losing his equilibrium. He could take his own life, he could walk into a post office and shoot people. We were trying to find a way to resolve this story of Major Tom Egan. It’s about him and it’s about finding our soul inside a technology that’s taking it away from us all the time and it feels like the right spiritual ending. I understand that you could make it more radical, more a larger fuck you to the military, but that’s not really what the movie is about.

AN: So it leaves a little hope for him but you have to remember what he just did. It’s an act of insanity. He took out one guy hoping he wouldn’t hit the person he’s hoping to save. He put all his skill into that but it’s murder. It’s a vigilante crime. He’s kind of lost it but he’s reaching out.

Are you ahead of time Andrew? Your films often seem to be addressing highly prescient issues?

EH: I want to answer that question for him. I’ve worked with him three times and I remember when Gattaca was coming out, it didn’t seem like anyone in the world liked that movie. We were looking for one positive review that we could put on the poster and couldn’t find one. Then we were doing an interview today and someone said “I know it’s obvious everyone loves Gattaca” and I was thinking, God it only took about 15 years.

AN: I always thought the reviews for a movie are at least five years after the movie. Is it still relevant and is anyone watching it? When Gattaca came out, the studio that released it in America put all their money into marketing I Know What You Did Last Summer.

EH: That was the movie they believed in.

AN: And they buried our movie. I could have been even more ahead of my time though. We had to wait a year for Ethan to be ready for Good Kill.

How do you come up with these ideas though?

EH: He gets them from me. I just sit back and I like him to take the credit.

AN: John Lennon had the most beautiful quote – “if you can put your finger on it you might push it away” so I never want to put my finger on what I do as I’m too superstitious. I worry that maybe I won’t be able to do it anymore so I don’t analyse it.

Flickfeast would like to thank Ethan and Andrew for taking the time to speak about their film. Good Kill premiered in Venice on 5th September. Our review can be found here alongside our interview with Good Kill co-stars January Jones and Zoë Kravitz here.