As the US military continues to ramp up the number of drone attacks while shifting funds away from manned aerial warfare, it has become an issue deserving of more and more scrutiny. Arriving to compete in the main competition at the 71st Venice International Film Festival, Good Kill does just that.

In the second of two interviews (see here for our interview with director Andrew Niccol and star Ethan Hawke), Flickfeast joined January Jones, who plays Hawke’s wife Molly Egan, and Zoë Kravitz, who plays fellow drone operator Vera Suarez, as they discussed their roles in the film, the impact drone warfare has on those involved and the challenges women face in Hollywood.

Why did you decide to make the film? Was it the subject matter?

Zoë Kravitz: For me I didn’t know that much about drones and reading the script educated me a little bit. I thought this is something I should know about living in America and thought if I don’t know about it there will be lots of other people who don’t. This movie can help educate people and start a conversation.

January Jones: It felt like it was a very important story that needed to be told and to be a part of it was a no-brainer for me. I was excited to work with Zoë again as well and am a fan of Ethan and Andrew.

Would you agree that although both characters you play are different, they both come across as strong?

ZK: Absolutely, it’s interesting to see how two different women are both strong. One in the military and one as a stay at home mother. They are both very powerful forces in Egan’s life. What’s most powerful about Vera is that she acts as the conscience of the film. She asks the questions that everyone else is too scared or too ignorant to ask.

JJ: I think the strengths with Molly are that she’s the one keeping the family together, the one trying to make everything ok for him (Egan) at home without having any kind of communication or understanding of what he’s going through at work. She’s not strong in any significant way other than that she’s a woman and I think all women are strong.

There’s a mix of dystopia and realism in the film. What are your thoughts on that?

ZK: It’s interesting. Andrew is a master of sci-fi and when I read the script it reads like a sci-fi film. If you read this film ten years ago it would have been a sci-fi film and the crazy thing about it is that it’s not now. That’s insane to me so the fact that we’re making a sci-fi film that’s not a sci-fi is interesting and terrifying.

JJ: Modern technology is just changing everything. Warfare 100 years ago is so different to how it is now. People wrote love letters instead of text messages. It’s evolving. It’s just the way it is.

Did you talk to army wives and female military personnel to prepare for the role?

JJ: I didn’t. I just did research on Post-traumatic Stress Disorder (PTSD) and went through some chat rooms where people were talking about what they were going through. I wanted to know what she is feeling because I have no experience with it and I don’t have friends who are partnered with anyone in the military so I wanted to know what some symptoms of that are. By extension, the partner of someone dealing with PTSD often has PTSD just because they’re in close proximity to that person. I wanted to be able to empathise with what she was feeling.

ZK: I didn’t speak to any women. I spoke to some men who were ex-drone pilots. I didn’t want to focus so much on the fact that she was a woman in the military. I am a woman and I know what it’s like in the world with men. Especially in any kind of industry where it’s mostly men. It’s a similar thing in this industry in Hollywood. I didn’t want to make it about that. That’s already there. I wanted to focus specifically on the drone pilots.

You mentioned that it can be tough for women in this industry. Did you have to fight to get this role?

ZK: I didn’t have to fight to get this one. I got very, very lucky as Andrew was kind enough to offer me the role but in general yes, I have to fight for a lot of things. Being a woman, being a black woman in this industry. It’s one of the last industries where they can legally say we don’t want you because of the way you look. It’s bizarre but it’s an industry all about aesthetics.

JJ: It’s a job where we put ourselves out to be judged, so often you didn’t get the role because you’re blond or too short or something like that.

ZK: Imagine going to a job in an office where they tell you they don’t want you because you’re black or blond or too this or that. It’s hard to hear.

How hard is it to break through into acting in the beginning?

ZK: I used to cry every time I didn’t get a role. You get invested and you think something’s wrong with you but you get a thick skin real fast. It’s the only way to survive in this business.

JJ: You can’t take it personally. There’s so much competition.  You’d go crazy if you did. 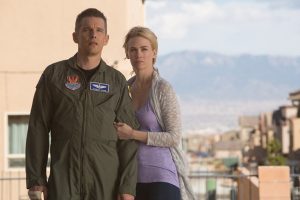 You’ve talked about the difficulty women face in the movie industry. Do you think we are likely to see any big Hollywood war movies with a lead role for women anytime soon?

ZK:  I certainly hope so. That would be nice.

JJ: There’s a real movement going on in music as well. It’s all about women power and all the stars in music are women. The same is happening in films too. There are a lot more things being written for women. It’s a more exciting time.

ZK: Even with The Hunger Games which isn’t necessarily about war but there is a war happening in that film; the way people responded to that and the same with Divergent. People are attracted to these heroic women playing the leads and playing the hero.

JJ: I also don’t think it needs to be a war movie to have a female heroine.

What’s your opinion on the use of drones? They are already used by the military and increasingly in a civil capacity.

JJ: I definitely have an opinion on civil drones. I saw one over my house the other day and I can tell you I’m not happy about it. Twice it flew over. I don’t know where it came from but it felt very violating. That’s going to be weird. There will be nowhere to hide, even in your own home. But the opinions I formed or didn’t form for this movie are my own. I think the movie can give everyone on both sides an education and encourage them to talk about it and be more open and non-judgemental on both sides. Just opening a conversation is the importance of it.

Ethan’s character used to fly planes for real while yours has a different background but they both reach the same view on the drone programme. Do you think the psychological impact differs if you have previous frontline experience or not?

ZK: I think it’s a different kind of sadness that they’re feeling. For Ethan’s character, it’s not what he signed up for. He signed up to physically put his life on the line for his country and now he feels like a coward. He’s doing something different. That disconnect makes him feel like a coward. For my character, I just don’t think she’s cut out for that kind of disconnect. You have to turn off your emotional senses to do something like that and I don’t think she’s able to do that.

Why do you think she signed up then?

ZK: I don’t think you realise the reality until you sign up and do it. Even just reading the script I was thinking that’s really intense and really scary and heart-breaking but after sitting there and doing those scenes it was much worse. You can’t judge anyone. You don’t know what it’s like until you do it.

A while ago Meryl Streep talked about her career and said she’s only around because of stamina. Do you think you have that stamina?

No plan B then?

JJ: Me neither – I don’t have a plan B either. I always thought I should have done but then I forgot about it. Which means I have to work on my stamina!

Flickfeast would like to thank January and Zoë for taking the time to speak about their film. Good Kill premiered in Venice on 5th September. Our review can be found here alongside our interview with Good Kill director Andrew Niccol and star Ethan Hawke here.