The Golden Age of the Schwarzenegger Actioner

There’s just something about Arnold Schwarzenegger. Whether it’s literal screen presence, borderline parody performance or off – kilter humour, he is one of the biggest ‘stars’ Hollywood has ever produced, trailblazing from competitive body building to politics via a fruitful few decades of varied blockbuster fare. But I don’t really need to tell you that do I. The guy is a legend. However before he started getting pregnant (Junior), re – defining the lows (highs) of the Christmas film (Jingle All The Way) and stoking the fires of nostalgia in his recent post politics career (Expendables), the 80s was a time where Arnold literally made his name. A name bold, recognisable and long enough to consistently fill cinema full of bottoms and the strap-lines of a thousand standard 30 x 40 movie quads – with the 80s seeing the squared jawed behemoth was churning out at least 2 blockbusters every year.

At a time where brandishing muscles, one liners and powerful phallic guns was a dominant symbol of Hollywood masculinity, Arnold’s 80s output had him working with some of the most inventive directors of the period, sterling effects work and intriguing source material, with a career trajectory that launched him into super stardom influencing the hearts of minds of film fans (and future voters). While Arnies later career films often descended into the typical post – action star self – parody and well payed cameos, his 80s films not only represent a star in his absolute prime but a time capsule of mediated 80s tropes that have come to define both Arnie’s cult fandom and a certain misguided nostalgia for where ‘men were men’ and the worlds problems were solved with nothing more than a simple gut punch.  From Cameron and Verhoeven to alien hunters and Barbarian hordes, viewing Arnies 80s catalogue is not only a testament the man , myth and legend but a journey into the cheese, tone and playful nature of 80s action cinema in all its superfluous and ridiculous glory. 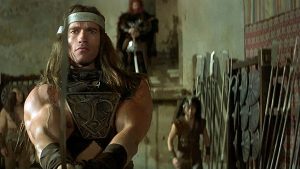 When you take into account the fact that Arnie’s first role in Hercules in New York was dubbed with an outsourced American voice actor upon release because of his ridiculously thick Austrian accent, it becomes apparent that his body rather than his ‘acting’ was the primary reason for casting in his early career. The same can be said for Conan the Barbarian in which the signature muscles were supplanted to a fictional fantasy context, with plenty of shirtless men, clumsy swordplay and Arnold predictably saying very few lines (producers didn’t trust him with dialogue just yet). Yet the film itself is a 80s classic in its own right , written by Oliver Stone, based on the pulp novels of Robert.E.Howard and partly responsible for the wave of fantasy/ adventure movies that littered the 1980s including Arnie continuing with sequel Conan the Destroyer (1984) and similar fantasy epic Red Sonja (1985). These are films encapsulate the 80s in the fact that nothing is too ridiculous, Arnie drinks mead and punches camels (in the face), James Earl Jones (voice of Darth Vader) shoots live snakes from a bow and arrow and gore is punctuated by clunky dialogue. Lest not forget the coming of age training montage. A true genre gem of the 80s.

If Conan made Arnold a star, Terminator and James Cameron made him a superstar thankfully getting the role over studio suggestion OJ Simpson, who was seen as too unconvincing to play a remorseless killer (true story). While we all know the signature story combining innovative effects work, dystopian science fiction and frenetic action, Arnie’s true career highlight has 80s swag oozing out of every orifice, from its attempted assassination scene set to the pounding synths of Tahee Cain ‘Burning in the 4th Degree’ to the hilariously typed 80s punks stereotypes (Bill Paxton) loitering on street corners. In much the same way ‘I’ll be back’ characterises the commoditised catchphrases that built brands and franchises in music and film of the period, the film also showcased the innovative use of practical effects, with the Terminator itself being one of the many wonderful creations Stan Winston and ILM created throughout the 80s. If Conan was a classic of the fantasy adventure genre, Terminator set the bar for mainstream science fiction, a wave that Arnie was not only happy to ride on but use in political speeches decades later. His most iconic role and one of the most iconic 80s genre films.

Functioning like a hybrid between a video game and G-I Joe commercial Commando is one the best 80s films ever made, with a simple ‘save the princess’ dynamic playing out as Arnie’s grizzled retired commando is sent on a mission to retrieve his daughter from a Cuban drug lord and a Australian chain-mail wearing Australian Freddy Mercury lookalike. There’s is literally so much to enjoy in this film from an 80s perspective, the hilarious exposition montage for Arnie and his plot device (daughter) feeding a deer and eating ice cream, the comic timing of the one liners often swiftly followed by death, the scene where Arnie fights his way out of a shed using nothing but garden tools. In much the same the mortality of 80s films ‘action stars’ pushed your suspension of disbelief at the best of times Commando takes the biscuit, seeing Arnold taking on perhaps the most poorly trained private army of henchman ever portrayed on film with a running time kill count of 81, achieved effortlessly via multiple explosions, slow motion deaths and death sentencing one liners. Like the Metal Slug 3 of 80s action cinema, Commando side scrolls from scene to scene with unbreakable pace, regular boss fights, perms , fronts and a fist full of attitude. I wouldn’t have it any other way. 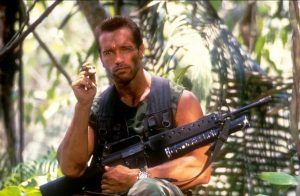 While watching Predator as a young’un subsequently inflected my primary school creative writing classes with jungle based monster fights and skinned hanging bodies (much to the concern of my teacher) the survivalist actioner has grown alongside my own film watching endeavours as a true 80s classic that only gets better with age. Following the endeavours of a crack group of specialist G.I’s investigating a missing platoon behind enemy lines lead by Arnie (obviously), the team encounter a mysterious force hunting them from the treetops, suspense-fully built up through flickers of light, laser sights and the silence between the hunter and ‘hunted’. Revealed as another incredible Stan Winston creation the film eventually boils down to Arnie vs Alien conflict, building to an explosive showdown filled with booby traps and mud drenched machismo, pulling all the 80s clichés out of the bag. As a film populated almost entirely by 80s male stereotypes including tobacco chewing, gatling gun wielding ‘sexual tyrannosaurus’ (Jesse Ventura) and scantily clad men emotionally discharging their firearms into the wilderness it’s fair to say that this film is an unashamed boys club favourite. However this does nothing to sap from the true appeal of a film mixing elements of relevant Vietnam combat dynamics, sterling practical effects and beautifully eloquent word play ‘stick around’, with Predator again seeing Arnie once again starring in both a pivotal original genre film of the period: now a nostalgic classic in a franchise unfortunately spiralling blissfully towards total creative stagnancy.

The Running Man is another example of Arnies infectious effect on source material in transforming it from intriguing concept to a formulaic 80s cliché ridden fest, in this case being an adaptation of Stephen King’s novel of the same name. Whilst King’s novel explored a dystopian future in which TV and the state combine to display public execution as a form of manhunt based entertainment, Arnies (1987) slightly revised these more believable themes by way of the tacky lights, camera and action of a 80s game show, with theatrical sets,  superfluous characters and one liners in abundance. With Arnie thrust into the game show against his will in a set – up he is forced to battle to the death with an operatic fat man who fires electric out of his hands, a demonic hockey player and a jet packed flamethrower wielding man called Fireball. Standard. From its Gladiators esque TV dynamic, to its dystopia by the numbers ‘one man against the system who framed him / rebel leader wears a beret etc’, it’s a relatively fun ride capturing the zeitgeist of the 80s in everything from its prediction of future technology to the cigar chomping, power ballad infused finale with added ‘victory kiss’. In much the same way that modern movies are considered cheesy in their cg influenced hyper stimulation, looking at the formula of the 80s Arnie actioner, (which basically involves running, comments upon physique, one liners and cigar chomping) is a simplistic pleasure to behold, often leaving you bemused how this sort of fare managed to be lapped up and consumed by the public. Who know… I guess you had to be there.