A Homage to Heathers

by Helen Cox
in Spotlight

To say that I’m a little bit obsessed with the film Heathers (1989) is a bit like saying that David Cameron looks a little like Mr Potato Head. In short: it’s something of an understatement. For those of you who haven’t watched any Channel 4 in the last 20 years Heathers is an over-acted, sharp-talking, scrunchie-touting black comedy from 1988 starring Christian Slater and Winona Ryder.

Slater oozes charisma as the on-screen Clyde-esque rebel Jason Dean, who instantly seduces the somewhat glib, dry-humoured Veronica (Ryder). This particular film is something of a rarity in eighties cinema. Even with the unusually high body count the portrayal of American high school is by far more believable than anything John Hughes produced, if in no other way, by the fact that the students caught up in a chain of alleged suicides do not grow as people in any notable way or get along better in the end. Surely not even the most idealistic of screenwriters could expect to depict teenagers growing and getting along whilst still maintaining credibility? In Heathers the teenagers actually become more vicious and uncertain about their place in the jock-infested shark pool that is Westerburg High.

The Heathers referred to in the title are a pretty nefarious group, led by the queen bee(atch) Heather Chandler who is the social equivalent of toxic venom. Unfortunately for her, it isn’t long before she gets her, rather grizzly, comeuppance. At first serving up a healthy dose of high school revenge seems cool enough but soon Veronica comes to realise that her attachment to Jason Dean and her desire to be part of the hottest clique in school are both more trouble than they are worth. She also, almost simultaneously,  uncovers the insidious and twisted plot that JD had been planning all along.

There are some particularly amusing quotes (Did you have a brain tumour for breakfast? / I love my dead, gay son. / This is Ohio, if you don’t have a Brewski in your hand you might as well be wearing a dress. / F**k me gently with a chainsaw – is that even possible to do?) and the reactions from teachers and general society to the sudden bout of teenage suicides is not only comical but also highlights the inability of societal peers to grasp the teenage condition once they have left that period of their lives behind. I have to admit that there are some obvious moralistic themes such as all teenagers (regardless of social status) being an outcast in some way but on the whole this film could easily be described as the antithesis of films such as The Breakfast Club that were made to show a softer side to the 1980s teenage world that none of us were ever really sure actually existed.

On that note I’m sure there are a lot of people out there with a lot of left-over hatred for high school and in case you (or your children) want to follow JD’s revolutionary footsteps and redress the popularity/certain death balance, I’ve outlined eight steps to rebellious success in creating the Jason Dean Guide to High School Rebellion… 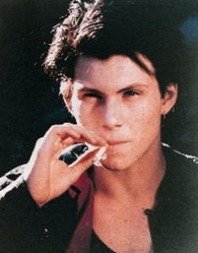 STEP ONE: Move to a small suburban town where everyone is seemingly less intelligent than you.

STEP TWO: Source a soul-mate who is unhappy with their social situation and wants revenge on those people she calls her “friends.”

STEP THREE: Seduce her so fast she doesn’t know what’s hit her. If it’s Winona Ryder, buying her a cherry flavoured slushy should be enough to swing it.

STEP FOUR: “Accidentally” bump off one of the people she has been mithering on about since you met.

STEP FIVE: If your would-be soul-mate suddenly gets all self-righteous and starts harping on about calling the police, assure them that the best course of action, unless they want to send their S.A.T. scores to San Quentin instead of Stanford, is to pass it off as a suicide.

STEP SIX: Convince your better half that whilst you’re on a roll you may as well rid the school of some other unsavoury students. If they get a bit shirty about this simply alert them to the fact that the only other option to dating you is to date crude, cow-tipping jocks who, let’s face it, just aren’t as pretty about the face as you are.

STEP SEVEN: Don’t, repeat don’t tell your girlfriend which button to press to stop the bomb if you decide to blow up the school – you’ll end up with the bomb taped to your own arse, and that’s never good!

STEP EIGHT: If anyone gives you any trouble pull a gun on them. But make sure you only fire blanks though as violent public displays tend to raise a few eyebrows and you don’t want to give away your end game too soon.

Don’t try this at home. Or even think about it. What’s your damage?

Like the article? Want the Heathers DVD? Buy it here

Helen is the editor of New Empress Magazine, a quality film quarterly in print. After qualifying for her M/A in Creative Writing Helen moved to North London to pursue a career as a columnist and writer. She has since written across TV, radio, websites, magazines and blogs primarily providing articles and commentary on film, travel, feminism and finance.